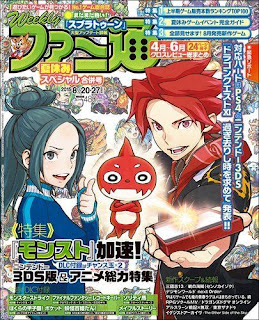 August 7th, 2015. Along with its coverage of Digimon World -next 0rder-, the most recent issue of Weekly Famitsu magazine included a list of the top 100 best-selling games of the first half of 2015, and placed Digimon Story Cyber Sleuth as 34th on the list, selling 108,547 units between its launch on March 12th and the end of data collection on June 28th. These figures notably do not include digital sales, which along with prepackaged downloadable content were a major selling point for the Japanese edition of Cyber Sleuth.

Bandai Namco was overall the number two publisher for these first six months, with 2,810,000 units sold, second only to Nintendo in total game sales.
Posted by Touya at 10:41 AM