August 19th, 2015. Chinese gaming site yxdown uploaded a photo of the most recent V Jump magazine's DigiNavi column, which includes a special surprise for Digimon fans; the latest entry in the Digimon World

franchise will be the first to allow the player to select a female player character, default name Shiki. Advertised with Piyomon and Palmon as a counterpart to Takuto's Agumon and Gabumon, Shiki is described as a cool young maiden, interchangeable with Takuto. Development screenshots show her traveling with a Gabumon, suggesting that the game's initial partner Digimon will not be gender-exclusive. These shots also show how -next 0rder- displays Digimon emotions in the field, ranging from expressions like delight and anger to being downcast.

V Jump also provides a peek at the protagonist's classmate, third-year high school student Hirose Kouta (広瀬コウタ) and his partner Guilmon. Kouta is said to be a "good guy" in the same class as either Takuto or Shiki, and his partner's name is Yukimura (ユキムラ). According to V Jump, the game's story follows the (male or female) protagonist on their journey from the real world to the digital world, in connection with the Digital Monster liquid crystal virtual pets. The issue also makes note of the Digimon World series' fifteen year history, emphasizing -next 0rder-'s relationship with the original game. More information will become available as clear scans of the issue emerge. 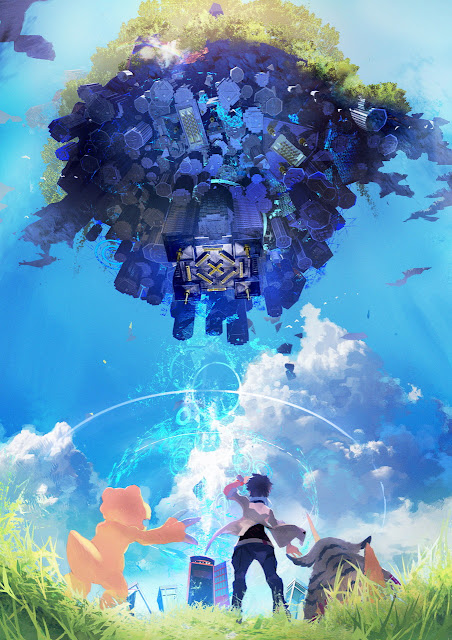 In other news, over the 18th both 4Gamer and Famitsu published digital equivalents to previously print-exclusive updates on -next 0rder-. Inside Games has also published versions of press screenshots sans the watermarks. The screenshots and information presented are identical to those found in their print equivalents distributed to Japanese retailers earlier in the month, save for one new statement from 4Gamer explaining -next 0rder-'s initial concept. "The concept art depicts the protagonist, Agumon, and Gabumon, looking up at a phone booth and floating island. What awaits them in this floating island?" Translations of other statements from the articles can be found on their respective pages.
Posted by Touya at 4:15 PM