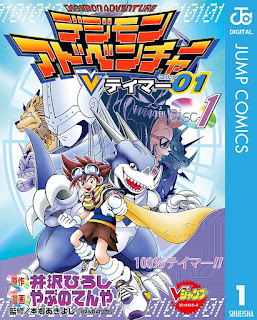 August 11th, 2015. Amazon Japan has prematurely uploaded the covers for digital editions of Digimon Adventure V-Tamer 01, leaking that all nine volumes of the manga will be available via digital purchase for Kindle users living in Japan beginning on August 21st, twelve years to the day that V-Tamer finished its original run. Mangaka Yabuno Tenya had previously mentioned a V-Tamer related announcement would be found in the August 21st issue of V-Jump magazine, hinting that fans should not be putting any money in the expensive physical volumes currently available. Yabuno was likely referring to this in his message, but whether there is any further V-Tamer material to come remains to be seen, as any scans of the issue are still a week away.

The Amazon listings make reference to the inclusion of color chapters, the C'Mon Digimon storyline, as well as crossover omake with other Digimon series, all of which were found in the physical volumes from 2003.
Posted by Touya at 9:22 PM