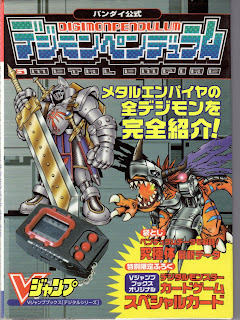 In the past few weeks Digimon fan Tuhka has graciously taken the time to scan the official Digimon Pendulum 3.5: Nightmare Soldiers and 5.5: Metal Empire guides for the community. Published by V Jump's publishing house Shueisha from 1999 to 2000 and endorsed by Bandai, the Pendulum guides are some of the most engaging pieces of media in the franchise's virtual pet chapter. At the time of their release, they were the closest Pendulum fans had to a world bible, informing tamers about the geography and inhabitants of the digital world. The only other media to address the virtual pets in this way were Digimon Web, Digimon World (PSX), and the pets themselves.

Hence the Shueisha guides are an important supporting source for canon in the Digimon fandom, and the amusing illustrations help too. The structure of each Pendulum guide is generally similar. At the beginning they introduce three principle characters based on the attributes of Vaccine, Data, and Virus. In 3.5 these are Wakuji, Dayta, and Vire, derived from wakuchin (vaccine) and shitsuji (butler), deeta (data) and 太 ta (grand), and from wairusu (virus). In 5.5 these are Wakuta, Data X, and Virchi. These characters serve as the player's narrators for the different sections of the guidebooks. 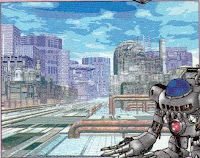 The guides then introduce the world of Digimon, framing the setting of Folder Continent, and the specific area that the particular guide deals with. (Savers Bay for the Deep Savers guide, Metal Empire for the Metal Empire guide, etc.) The V Jump guides frame the world of Digimon in a way that Keibunsha's utterly fail to. Having access to the official sources and sanction of Bandai works in Shueisha's favor; nowhere else will you find Folder Continent broken down by field in this level of detail. For the Japanese literate the Shueisha guides are a really fun read, though I personally find Metal Empire to have a better handle on the lore than Nightmare Soldiers. ME actually lays out the entire Folder Continent and where each field originates from. 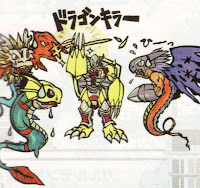 Each monster's profile also provides original artwork of its superhit attack and the name of it, and a full overview of that Digimon's various sprites. But in spite of giving the exact superhit ranges of each Digimon, details on their branching evolution paths, and a considerable information on what each function of the Pendulum devices do, the guides aren't complete. They're missing lists of the optimal evolution routes that produce stronger superhits.

It's particularly disappointing coming from 5.5 guide because it was launched at the end of the Pendulum's life. I guess that'll just have to wait for when my Perfect Training guide arrives!


The books are quite small, measuring just 6.1 x 4.2 x 0.3 inches. But the amount of detail crammed in is impressive. Unfortunately, these guides have acquired something of a collector's value over time, and the prices have been artificially driven up by secondhand sellers in Japan. At this moment the Digimon Pendulum 1.5: Nature Spirits guide

is available for a rare $15 low through Amazon, but be aware that depending on your location shipping could climb up as high as to double the price.
Posted by Touya at 3:45 PM