Japanese All Digimon Cultural Exchange to Be Held on 9/26

September 25th, 2015. For the past month Japanese Digimon fans have been circulating a schedule over Twitter for an upcoming gathering on the 26th, the "All Digimon Cultural Exchange & Tournament." The third of such meetups held this year, the event is being organized by DIGIMADO (デジ窓 "Digi Window") the de facto lead organizational force in the Japanese fandom since Odaiba Day 2009. DIGIMADO's formation was prompted by the demise of Bandai's official systems of organized play for the card game in 2008. In addition to hosting fan gatherings for the virtual pets, video games, and card games, DIGIMADO also puts out occasional podcasts in Japanese.

The exchange will last from ten AM to nine PM JST, and be held in the 12th meeting room of Core Ikebukuro (otherwise known as the Toshima Cultural Center), a regular location site for DIGIMADO. The organization is anticipating a maximum of 50 persons; those participating will have to pay a 500 yen entry fee, which grants them a day pass into Core Ikebukuro. Exchanges of this type are primarily coordinated over TwiPla, an event organizational tool that interfaces with users' Twitter accounts. At the time of this writing, 21 persons have preregistered for the event, 8 stated that they would "maybe" go, and 1 abstained.

Planned tournaments include a Digital Monster Card Game (also known as Hyper Colosseum) competition, a single-elimination Cyber Sleuth tournament, a dot matrix virtual pet/Digivice tournament, and an All-Star Rumble tag team tournament using the PlayStation 3 edition of the game. Digimon Tamers Battle Evolution and Digimon World: Digital Card Arena (released in western countries as Digital Card Battle) were listed on the event blurb, but no events for those games were found on the time table (translated below).

The Hyper Colosseum tournament will use ruleset Ver.M3.0, a special set of rules created by DIGIMADO that act as a combination of tournament regulations, card errata, and deck restrictions. Newer fans interested in the card game will also be able to learn the game on-site; these types of events are one of the ways that Hyper Colosseum has survived over the years despite its last actual booster set having come out almost a decade ago, and its final starter deck launching two years before that.

The portable device event will use a life system tournament (ライフ制大会 raifu sei taikai) where each participant is assigned a base "life" value that decreases when they lose a match. Opponents with similar records are paired each round, and those with a life score of 0 at the end of the round are eliminated from the tournament. After either a predetermined number of players remain or a certain number of rounds have passed, the surviving tamers are then moved on to the top cut, where they are paired against one another in a tournament bracket to determine the champion. 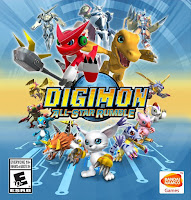 At 6:00 PM a Digimon All-Star Rumble tournament will be held using the PlayStation 3 edition of ASR, in a two-versus-two tag match format. Tournament regulations permit the use of all 12 characters, as well as the changing of evolutions prior to the beginning of the match. However, one's Digimon of choice is fixed; hence someone that chooses Agumon must continue to play Agumon for the entire tournament, though they may switch between enabling his War Greymon or Omegamon evolutions freely. (This is a standard for Japanese fighting game tournaments; similar rules prevent changing characters in Super Smash Bros.) Stages are selected randomly, items are turned on, while Digicards are turned off.

Although many English-speaking fans would prefer to forget All-Star Rumble existed, treating it as a shameful stepping stone towards Cyber Sleuth's international release, Japanese fans have latched onto the game as the most recent in a line of Digimon fighters, going through the trouble to import it in face of its lack of a Japanese release. ASR was also played at both preceding 2015 DIGIMADO exchanges.

The rules and regulations for Cyber Sleuth are to be announced on-site.
Posted by Touya at 3:00 PM