September 29th, 2015. Fan event organizer DIGIMADO published the results of their most recent All Digimon Cultural Exchange from the 26th. As well as being a general assembly of fans to discuss the Digimon franchise, the exchange centered around a six-hour Hyper Colosseum card tournament, and simultaneously held competitions for Digimon Story Cyber Sleuth, handheld Digivices and virtual pets, and an imported Digimon All-Star Rumble. Approximately forty persons participated in the exchange, ten short of the event's cap. Participants competed under their internet pseudonyms rather than their real identities, many of them using their Twitter or blog handles that were already known in the Japanese Digimon community. The teams of the Cyber Sleuth finalists are detailed below, along with the partners of the Digivice tournament finalists, and the All-Star Rumble championship team.

The Cyber Sleuth tournament employed a chess clock ruleset where each player was permitted a maximum of 15 minutes to make decisions; each turn their timer would count down, and freeze when they ended it. Players were also prevented from having more than one Digimon with recovery or revival skills active, strategically limiting them to just one medic Digimon. Seraphimon became the cleric of choice of the tournament, favored for his incredible Perfect Revive skill, which revives all team members and fully restores their hit points in exchange for 80 SP--just over 60% of his maximum. Because item usage was not allowed, the Spirit and Physical Drain abilities were found on most Digimon, which both take 10% of the damage those abilities deal and restore that value of SP to the user. In this way each turn could be carefully planned out in advance, surrendering a percentage of one's SP for different attack abilities, then strategically using Drain skills to ensure that they would not run out of SP on succeeding turns, gradually wearing one another down.

This article uses affiliate links. Affiliate links are hyperlinks which redirect the reader to a product on an e-commerce website; if a reader accesses one of these listings through one of the links below, and/or purchases the item listed, the editor is provided a referral fee and/or commission fee. Affiliate links are labeled when present, and the service being linked to is identified.

In the handheld device tournament, Jesmon from 2014-15's Digivice Ver. 15th was the primary choice for most entrants. Jesmon has the highest base stats of any Ultimate-level Digimon at 7 HP/5 AP, surpassed only by the Super Ultimate Omegamon's 8/6. Omegamon cannot be used in versus battles though, because he has a two-step evolution--first warp evolving from Agumon/Gabumon to War Greymon/Metal Garurumon, and then Jogressing to Omegamon. In order to maintain compatibility with the original virtual pets, there is effectively only one turn to evolve when connecting for multiplayer on the Ver. 15th, locking Omegamon out of tournament play and forcing tamers to use only Ultimate Digimon. Jesmon's 7/5 is one Attack Point higher than any other Ultimate, and his Data attribute gave him advantage versus 5/9ths of the Ver. 15th Ultimates, which are primarily Vaccines. This was what gave Jesmon the upper hand in grand finals versus Herakle Kabuterimon, also a Vaccine-attribute.

Out of the top 4, fourth place tamer Gaiou was the only one not to use a Digivice Ver. 15th in the finals, instead bringing a Herakle Kabuterimon raised on his Digimon Pendulum 1.0: Nature Spirits. The day before the Cultural Exchange, Gaiou tweeted a photo of his Herakle Kabuterimon gearing up for battle. His Digimon had evolved just in time for the event. On the Pendulum 1.0, when properly raised on a route of Mochimon > Tentomon > Kabuterimon > Atlur Kabuterimon, Heracle Kabuterimon has an improved probability to fire a superhit each round, with its superhit index being about four standard deviations greater than the average. (This is because the attribute of a Digimon at each stage of evolution can positively or adversely affect the superhit index, changing how wide the margin of error is for scoring a superhit during the pre-battle "count.") Unfortunately, Herakle was a less optimal call in the handheld tournament, as there were few Pendulums in the running to provide Virus-attribute opponents, due to the general excitement for the latest model of Digivice.

The Pendulums, Ver. 1~5 Digital Monster Pets, original Digivice, and Ver. 15th were all valid for play. However, the connection process for each device was different. The original Digivice only battles as if it were a first generation Digital Monster pet, even against other Digivices; Pendulums are backwards-compatible with that system, but fight using their own best-of-three system versus other Pendulums, while the Ver. 15th has an HP/AP system for other 15ths. How the Ver. 15th connects to the Pendulum is not well documented, but it's presumed to behave as if it were an original Digital Monster just like on the Digivice, with each Digimon having a flat percentage to win depending on which group they belong to. In this scenario all Pendulums register as Monzaemon, having a base 8/16 chance to win any battle. That probability increases depending on how the opponent registers.

The top cut began shortly after 1:14 PM JST (12:14 AM Eastern Time), and shortly after the grand finals Gerumon tweeted about their victory, thanking Jesmon for their hard work. He had previously faced Hirari in the semifinals, while Sasakani had been paired with Gaiou. 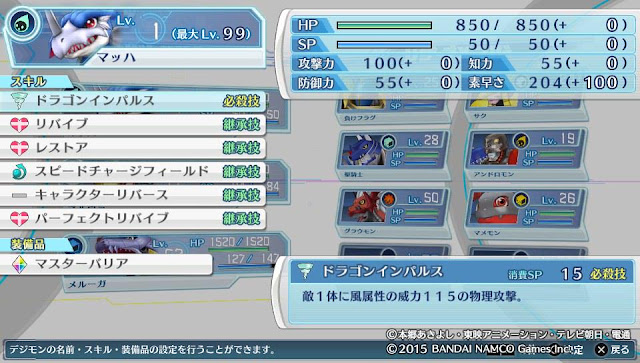 Jitenryuu uploaded screenshots of his Cyber Sleuth team to Twitter; all of their information, including statistics and nicknames, are given below. (In addition to these Jitenryuu also had a Mirage Gaogamon, but he chose not to use it on his team.) Controlling status was one of the most important aspects of the tournament, as status inducers like Lilithmon's Phantom Pain (three hits each with a 35% chance to poison) and Belphemon Sleep Mode (50% chance to put all opposing Digimon to sleep) have become highly prevalent in Sleuth's multiplayer. To cope with status, Jitenryuu came prepared with multiple specific-status blocker accessories, and the all-purpose Master Barrier. Master Barrier grants 50% immunity to all status ailments, providing the best all-around coverage one can get against status in Cyber Sleuth.

Another element contestants fought for was control over the attribute and elemental cycles. The Character Reverse skill has become entrenched in Cyber Sleuth's Japanese metagame because of how it completely reverses the attribute and element cycles. This causes Virus Digimon to become strong against Vaccines, Fire to become strong against Water, Ground to become strong against Wind, and so on. If one loses access to Character Reverse, then they're unable to reset a losing battle in their favor, hence it's become staple necessary on most teams. Light Digimon like Seraphimon and Sakuyamon are invaluable with Reverse around because the relationship between Light and Dark is mutually damaging rather than cyclical, so regardless of if Reverse is used or not their relationship stays the same.

Jitenryuu's decision to run Aero V-dramon rather than his evolved stage Ulforce was motivated by Aero's Dragon Impulse, which is lower costed than Ulforce's Shining V-Force relative to his maximum SP and Wind-aligned rather than Light-aligned (which otherwise would have been redundant due to the team already having multiple Digimon with Holy Knight and Saint Knuckle skills). Both Aero and Ulforce have the Godspeed ability, which causes them to always move first as long as there are no other Godspeed Digimon with a higher base speed in play, and can use the inheritable buff skill Speed Charge Field to raise their allies' Speed and attempt to create a turn lock. This makes Aero and Ulforce interchangeable except for the attributes and costs of their unique skills.

According to Jitenryuu, there were only six participants in the Cyber Sleuth tournament. The low turnout was likely due to the difficulty of assembling a competitive team, as while raising statistically sound monsters is easier in Cyber Sleuth than in contemporary games like Pokémon, it still requires one to complete the main game and postgame content first, and acquiring multiple copies of specific accessories like Master Barrier can be a chore. Jitenryuu also entered the handheld tournament, using Gryphomon from Pendulum 4.0: Wind Guardians. 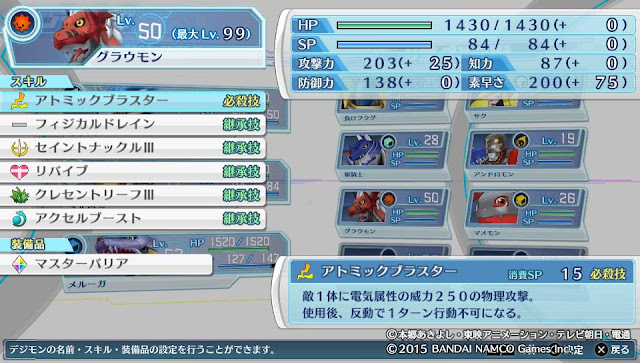 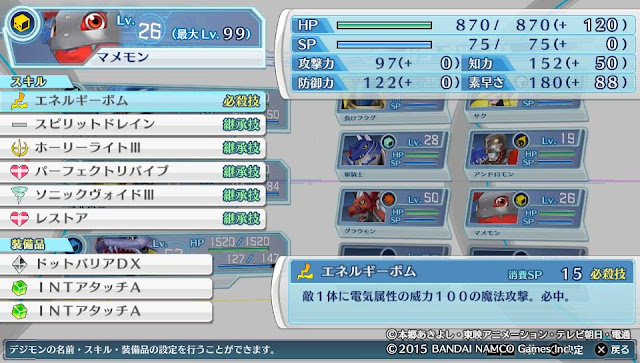 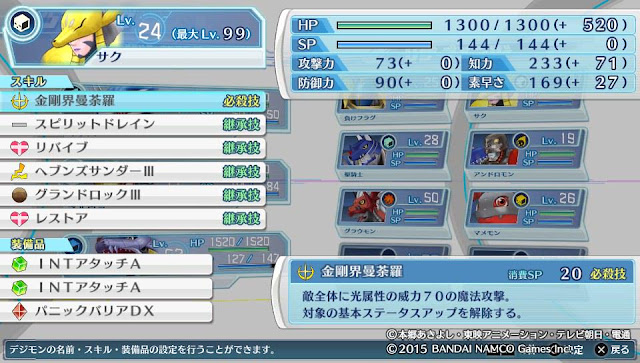 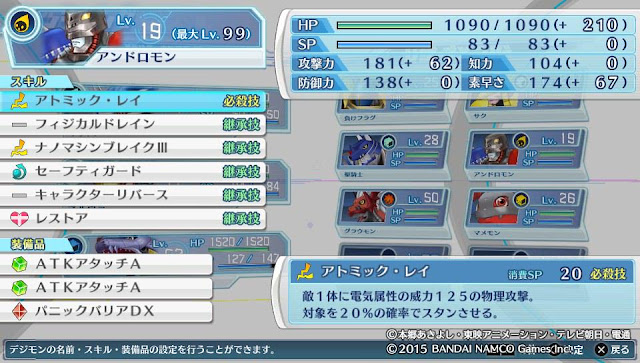 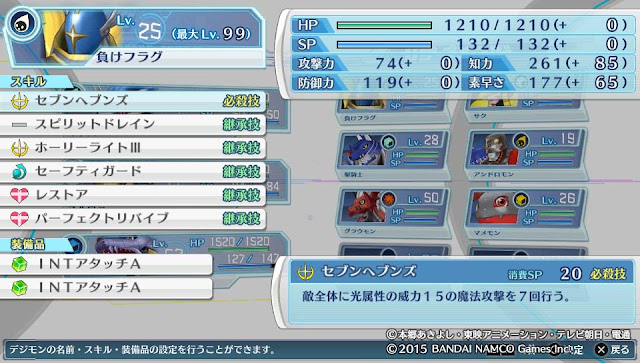 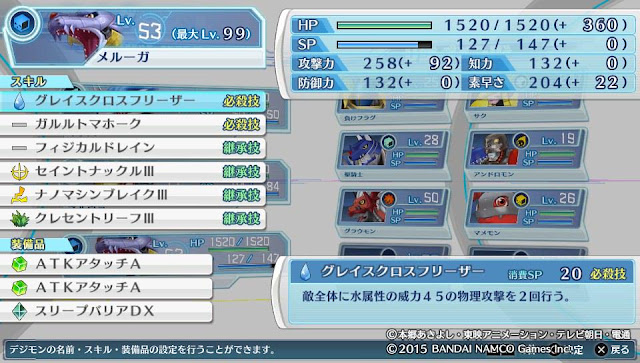 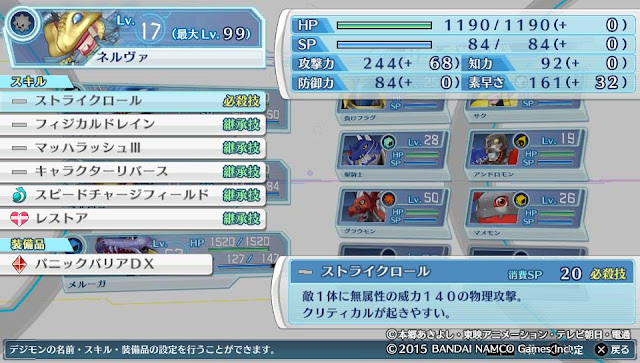 The All-Star Rumble tag team tournament was won by Jitenryuu and Susuyan, playing Impmon and Shoutmon. Both of these characters fall into the same general template, having fast long-range fireballs with low SP costs and strong knockback. Impmon's fireball is unique in ASR for having a homing property that will chase the opponent across two thirds of a stage's horizontal range before expiring, from two separate angles of attack. Unlike Shoutmon's, Impmon's fireball can be fired while moving, which plays to his fast ground speed. All-Star Rumble's guard system favors players gaining ground quickly and refusing to lose it, as no resources are built up through guarding and once a Digimon's guard is broken a knockout becomes guaranteed. SP is not regained when respawning, so once a player's limited number of attack breaks are exhausted they become extremely vulnerable to fast, combo-heavy characters. This has created a bias favoring Agumon, Shoutmon, Impmon, and Wormmon over the other eight playable characters. Shoutmon in particular is one of the few Digimon that can begin an attack string immediately coming out of a guard with no delay, and his melee combos have incredible range that lock slow and shorter-range Digimon like Guilmon out of being able to compete on even ground.

Stages for All-Star Rumble were selected randomly, and participants entered in a two-on-two format. No Digimon nor stages were banned, and items were enabled.

The previous All Digimon Cultural Exchange took place over three months ago. DIGIMADO hosts these events quad-annually, and will be hosting another combination meetup and tournament in December. By that time, the first film in the Digimon Adventure tri. series will have already debuted in theaters. DIGIMADO has plans to expand their scope in the future, increasing the size of the events and accommodating larger tournaments.
Posted by Touya at 6:37 PM