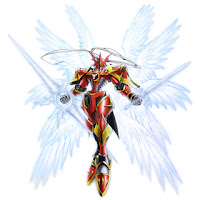 October 17th, 2015. Anime News Network has published partial scans from the December issue of monthly V Jump magazine, which introduces the two new Digimon World -next 0rder- characters Luce (ルーシュ Ruushu), and Taomon, one of the other Digimon that left Jijimon's village. Luce is a young girl who's lost her memories, but keeps a positive attitude and carries a Numemon doll with her. Luce is pictured next to Dukemon Crimson Mode, who is cut off in ANN's partial scan; the edge of his wings can be seen overlapping with Luce's character artwork.

At this time, there is no verification that Crimson Mode is her partner, which would be strange considering that another character is already partnered to Guilmon.


Direct translations
Taomon
「何用で参ったか？人間よ 」
Naniyou de maitta ka? Ningen yo.
"What business have you, defeating me? Human."
A Perfect-level Digimon with mastery over Onmyōdō. (The magical practice of manipulating yin & yang.)

Luce
「アタシ、ぶんぶんがんばる！」
Atashi, bunbun ganbaru!
"I'll buzz buzz my best!"
Although she lost her memory, she's an energetic girl who always carries around a stuffed Numemon.