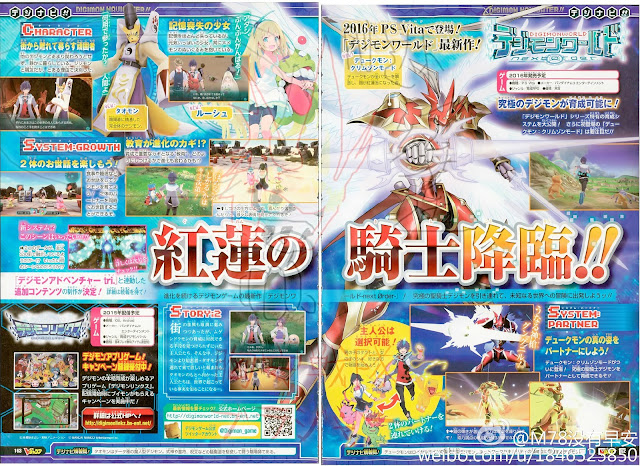 October 18th, 2015. Chinese Digimon fan Red Lotus (紅蓮) has scanned the December 2015 issue of V Jump magazine, which went out to magazine retailers earlier this week. The issue includes several brief story blurbs about Digimon World -next 0rder- that address what happens after the player helps rebuild the Village of Beginnings, covered in previous issues. As the reconstruction of the village progresses, the main characters try to track down Mugendramon, and Jijimon calls on the hermit Taomon to explain the history of what happened in the digital world to the player. Direct translations are provided below.

The issue also shows Gaomon and Wormmon as playable Digimon, and hints at a modified Jogress system. Prior speculation from looking at the TGS2015 trailer is that Jogress may only be an in-battle mechanic in which the player's two partner Digimon temporarily fuse together. The screenshots in this month's V Jump have prompted another idea entirely--that the player may participate in the evolution and fuse with both of their Digimon to reach Ultimate level, in the style of Digimon Tamers.

STORY: 2
As the reconstruction of the village progresses, the protagonist and their friends look for a way to oppose the looming threat of Mugendramon. During this, Jijimon calls for the aid of the sage Taomon. From Taomon, the protagonist learns the facts of what happened in the world...

The Stubborn Digimon That Left the Village
Not liking to involve themselves with other Digimon, Taomon lives quietly alone. A close friend of Jijimon, they have their own reasons for living away from the village.

The Amnesiac Girl, Luce
"I'll buzz buzz my best!"
Although she lost her memory, she's an energetic girl who always carries around a stuffed Numemon doll.

The Key to Ultimate Evolution!?
The essential key to raising Digimon is "training." What kind of evolution will you achieve!?

Look Forward to Caring for 2 Digimon!
Raise your Digimon with care, tending to their sleep and meals! You can care for two partners simultaneously.

A New System!? What in the World is Happening in This Scene...!!
The two Digimon's data fuses right before the protagonist...!? Just what kind of scene is this!?

Choose Your Character!
The boy Takuto or the girl Shiki, begin with whichever you prefer!