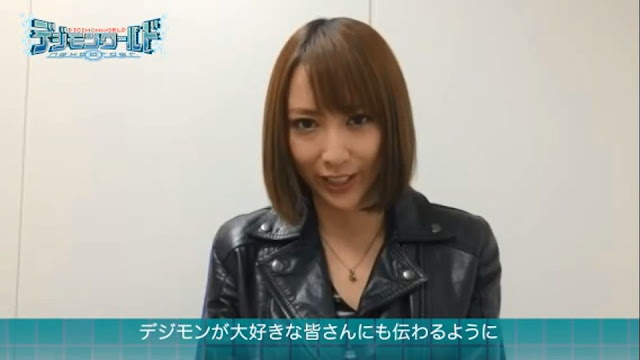 "To everyone who loves Digimon and travels with them, please look forward to it."
November 4th, 2015. Japanese singer Aoi Eir, who was just named earlier this week as the one responsible for Digimon World -next 0rder-'s main theme, has put up a special announcement through YouTube regarding her role. In it Aoi recounts a familiar story of playing Digimon World as a child, how her Agumon evolved to Numemon and then Monzaemon. Her story will resonate with those that played the original game; getting Monzaemon is a near universal experience for first time Digimon tamers, as when starting out the unclear evolution requirements often lead them to go through this sequence to make the early parts of the game easier.

In a similar interview with -next 0rder- character designer Taiki last August, the artist also made statements outing himself as an original generation Digimon fan that had a Digital Monster virtual pet on its launch day. Based on these interviews it seems Bandai has staffed -next 0rder-'s development team with individuals that were fans of Digimon as children, to reproduce the aspects of the games that made them so successful to begin with.

A translation of Aoi's statements is provided below. Note that when she refers to the "village," she's talking about the Village of Beginnings, which was called File City in the English localization of Digimon World, and Primary Village in the dubbed anime.

I was among the first generation to play Digimon World. I was totally immersed in its universe. I remember building the village, and returning the Digimon that lost their memories to that place, my little brother and I were addicted. It was a disaster, because we accidentally raised a Numemon, but after that we went to Toy Town and evolved him to Monzaemon.

Up until we got Monzaemon, it was a very long road. When going to Toy Town, we couldn't afford to encounter any other Digimon along the way, and I was mashing "flee" with my nails.

Even now, I remember the Digimon. Things like Agumon, Jijimon's village, Botamon, it's amazing how clear everything still is. In the end, we were safe once we arrived at Toy Town. I was happy to get Monzaemon, coming from Numemon. I remember having to use Buster Dive a lot. I thought since no enemies [could stand up to it], we could go to various places and do our best to develop the village.

This is why I am currently recording this song. It's become a very bright, up-tempo piece of music. I want to work hard on this project, so to everyone who loves Digimon and travels with them, please look forward to it.

Digimon World -next 0rder- will launch in 2016. Please wait patiently for follow-up information. This has been Aoi Eir.