November 2nd, 2015. Digimon fan event organizer DIGIMADO has announced the date and location for their next All Digimon Cultural Exchange. Exchange Ver.04 will be held on December 5th, 2015 (Saturday), lasting from 10 AM to 8 PM. Instead of the organization's regular meeting place at Core Ikebukuro, this time the Exchange and its associated tournaments will be held at the Tokiwadai Assembly Hall in Itabashi, Tokyo. In addition to serving as a fan gathering to discuss Digimon and hang out, DIGIMADO's events are the only spaces in the world where organized tournament play for the various Digimon virtual pets and video games take place. The events have earned particular attention for hosting Cyber Sleuth tournaments through the RPG's ad hoc multiplayer, and for being the last bastion of the original card game.

Part of the reasoning for the change in location this time is to accommodate a slightly larger turnout, as DIGIMADO has raised their expected maximum from a 50 person cap to 55. (At this time they have met approximately one fifth of their attendance goal.) Since 2008 the organizers have consistently seen an average of 40 participants at each event, but the upcoming premier of Digimon Adventure tri.'s first film, Reunion, is expected to gradually increase the number of adult fans participating in Digimon events. To capitalize on this, organized attendance of tri. screenings are also being set up by independently-acting fans with the group's support.


The main events will be a series of scheduled tournaments for the Hyper Colosseum card game, Digimon Story Cyber Sleuth, and a Ver. 15th handheld device tournament. Tournament regulations will be announced at a later date. In the previous tournament, legal devices included the Digital Monster Ver. 1~5 pets, the entire original Digimon Pendulum series, Digivice 1.0 and 2.0, the Digimon DigiBat series, and the eponymous Digivice Ver. 15th. Jesmon came to dominate the handheld tournament, while Seraphimon became the linchpin of competitive Cyber Sleuth teams for his role as a superb healer.

The Exchange will further be hosting free play for the PlayStation 2 Digimon games and the PlayStation 3 edition of All-Star Rumble, which was imported especially for DIGIMADO's purposes. (The game was never released in Japan.) Free play will also include the PSX title Digital Card Arena, as well as the Game Boy Advance games Digimon Battle Spirit and Digimon Racing. As at past events, there will be a workshop to teach the Hyper Colosseum card game to new players. These workshops have continued to serve an important role in injecting life into the card game, as since 2004 Bandai has only supported it through special commemorative releases. 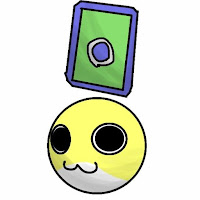 DIGIMADO (デジ窓 "Digi Window") is the de facto lead organizational force in the Japanese fandom since Odaiba Day 2009. Their formation was prompted by the demise of Bandai's official systems of organized play for all Digimon card games in 2008. In addition to hosting fan gatherings for the virtual pets, video games, and card games, DIGIMADO also puts out occasional podcasts in Japanese. Fitting its origins as a TCG event organizer, DIGIMADO's mascot is Cardmon C1, from Digimon World 3: The Door of A New Adventure.
Posted by Touya at 7:07 PM