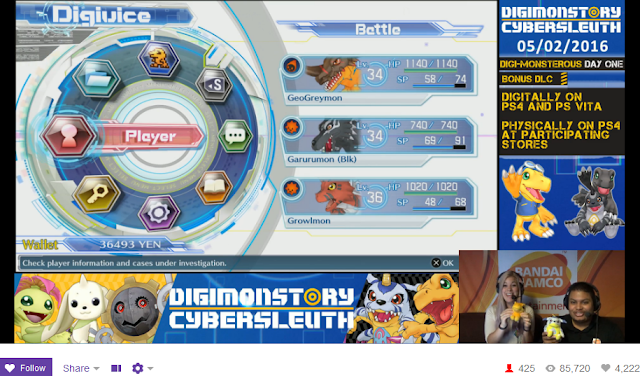 November 19th, 2015. The European Digimon Story: Cyber Sleuth stream has just confirmed that Cyber Sleuth's European release date will be on February 5th, 2016, three days after its American counterpart. In addition, the stream has also confirmed that the preorder DLC will be available digitally for both the PlayStation 4 and PSVita, as well as on physical copies of the game.

The stream is currently ongoing, and fans can win small Digimon plush toys by tweeting the phrase "I'm watching @BandaiNamcoEU's Digimon Story Cyber Sleuth livestream! http://bnent.eu/twitch  I want to win goodies!" If the stream reaches 1000 or more viewers, a large Agumon plush will be given away. Fans can watch the stream here: http://www.twitch.tv/bandainamcoeurope 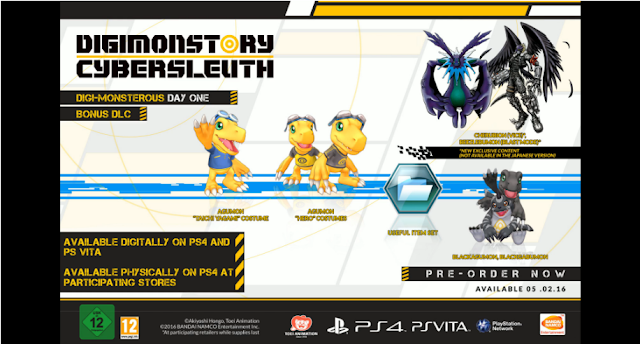 Digimon Story: Cyber Sleuth will launch in English on the PlayStation Vita, PSTV, and PlayStation 4 on February 2nd, 2016, in North America, and February 5th, 2016, in Europe.

2:30 PM EST Update: The stream has concluded. The peak viewer count was 583, more than 400 below the target goal. The big Agumon plush will instead be given out at a subsequent Cyber Sleuth stream, held in the months leading up to the game's February release. Stream hosts Issad and Juliet also confirmed that the game's online multiplayer modes will be retained for the western release.
Posted by Touya at 10:30 AM