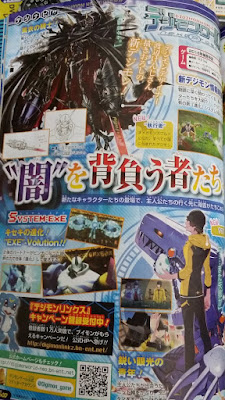 November 19th, 2015. The first scans of January 2016 issue of V Jump magazine were uploaded to Twitter this morning by Japanese Digimon fan @kimi_463, providing a first look at the mysterious Digimon teased in Digimon World -next 0rder-'s TGS2015 trailer. The magazine has one more surprise in store: a character resembling the first Digimon World protagonist is appearing in the game as the tamer to Mugendramon, the Digimon that has been wreaking havoc on the Village of Beginnings.

Referred to as ??? and "the young man in the knitwear cap" in V Jump, he is not expressly identified with the first game, but has an extreme resemblance to the official guidebook art for the character that Japanese fans call "Analogboy" and American fans call "Hiro." (See below) The magazine shows him doing something to a Digitama, and collectively identifies him and the black Omegamon as "those bearing darkness." It's possible that this new character is the one Taomon's profile refers to as distorting the digital world. Direct translations are provided further down.

The much-speculated-on Jogress system has been named in the magazine to as '"EXE"-Volution' which is a "miraculous evolution" that allows both of the player's two partners to evolve into one when put in a difficult situation. 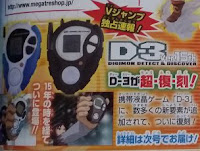 This issue also promises that next month's volume will include more information on the 15th Anniversary D-3 Digivice, which is due to be reprinted in 2016. 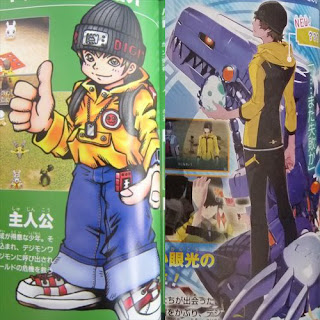 "Executor"
A Digimon bearing resemblance to Omegamon Zwart, but about which everything is shrouded in mystery.

Those Bearing Darkness
With the appearance of new characters, the protagonists' future becomes pitch black.

Miraculous Evolution! "EXE"-Volution!!
When your two partners are in a pinch, they can combine through the power of bonds and "evolve" to restore themselves!

A Young Man with a Piercing Gaze!
The protagonists meet a young man wearing a knit cap, clutching a Digitama in his hands. [Remainder cut off]