Habu Kazumasa: "The Passion of Our Fans Gave Us a Lot of Strength" 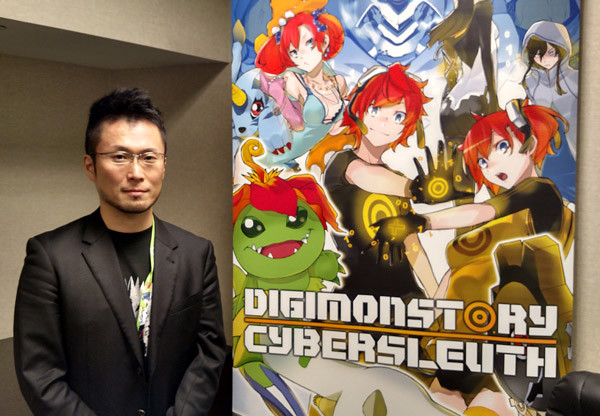 November 19th, 2015. In a recent interview with Todd Ciolek of Anime News Network, Digimon Story: Cyber Sleuth producer Habu Kazumasa explained his decision making process behind the game. Habu has been the producer for Digimon games since 2008, around the era of Digimon Championship on the Nintendo DS. Being directed at both nostalgic fans and newcomers to the franchise, Habu chose the Story series for its easy-to-get-into features, and drew ideas from the franchise's original line of digital toys.

According to Habu, Cyber Sleuth was influenced by new technology and current discussions about virtual reality. He focused on including the most iconic Digimon to the game while introducing almost no new monsters, as opposed to forcing in all of the currently existing one-thousand-plus Digimon. Habu explained that the English version of the game's long-anticipated Hard Mode  will be available from the moment the player starts the game, while the New Game Plus feature will be available after one complete run of Sleuth. He also alluded to modifications made to the strength of certain Digimon's skills, potentially rebalancing a somewhat skewed metagame.


“The localized version of Cyber Sleuth was approved because of a passionate campaign run by fans that had a petition signed by 65,000 people. [...] When we found out we were so cheered that we decided to bring a localized Cyber Sleuth to North America.”
As in previous interviews, Habu emphasized the power of Operation Decode's massive fan petition in persuading Bandai to localize the game. The producer also touched on the idea of making "toys and animation based on this narrative and world," but the success of the game overseas is Bandai's first priority.

Digimon Story: Cyber Sleuth will launch on the PlayStation Vita and PS4 in North America on February 2nd, 2016, and in Europe on February 5th, 2016.
Posted by Touya at 2:49 PM