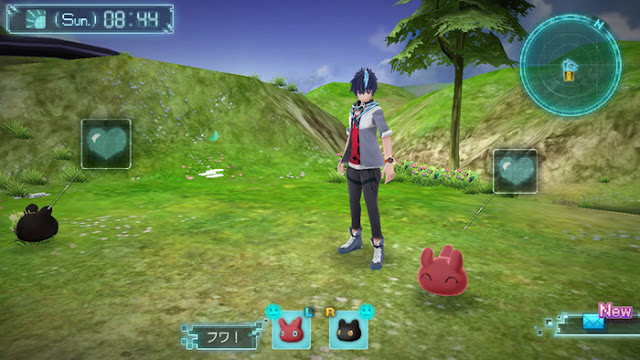 November 6th, 2015. The Digimon World -next 0rder- title site has updated with a new batch of screenshots, this time focusing on the game's dual partner care system. Each partner Digimon is assigned to one of two slots in the field, and while they live on synchronized sleep schedules, they behave asynchronously making their own comments and moving independently of one another. The Digimon partner system has structural similarities to the 2007 Digimon Twin virtual pet, which like -next 0rder- split the tamer's partners into L and R Digimon.

The screenshots also tease a messaging system, with notifications similar to Digimon Story: Cyber Sleuth's DigiLine. The DigiLine system allowed the player to text in-game characters with preprogrammed responses, but given -next 0rder-'s much smaller cast, this feature may have a slightly tweaked purpose.

The previous batch of screenshots showed the game's variety of environments, and diverse partner Digimon. Digimon World -next 0rder- will launch on the PlayStation Vita and PSTV in 2016.