December 28th, 2015. The Digimon World -next 0rder- title site made a special update today; depending on which store players preorder the game with, they'll receive one of three sets of preorder bonuses in addition to the game's first print DLC. These bonuses take the form of evolution items that instantly evolve a partner Digimon to an Ultimate-level stage; items of this kind were also found in the original Digimon World, but did not increase the partner Digimon's stats or lifespan in the same way that natural evolution would.

The Geo original bonus is a product code for the "Ultimate Evolution W Item Set," which contains the evolution items Courageous Dragon Core/勇竜核 (Hououkaku) and Artillery Wolf Core/砲狼核 (Yuuryuukaku). These itemsn instantly evolve a partner Digimon into War Greymon or Metal Garurumon. Tamers that preorder with Amazon JP will instead receive the product code for a Black Zenith Core (極黒核 Kyokukokukaku), which will evolve their partner into an Omegamon Zwart. Those that preorder with stores that are part of the Bic Camera brand (including Sofmap and Kojima) will get a download code for the Chaos Core (混沌核 Kontonkaku) which evolve their partner into Chaos Dukemon.

Exclusive DLC deals of this kind are common in the Japanese gaming industry, with certain brands like Lawsons having particularly notable download campaigns that give players in-game store uniforms. Amazon is a frequent backer of such exclusive preorder content. However, for rare item hunters and collectors these deals create a small headache, as without an in-game shop feature there's no way to acquire all of the downloadable items on a single game. Whether these items will be obtainable through another method remains to be seen. 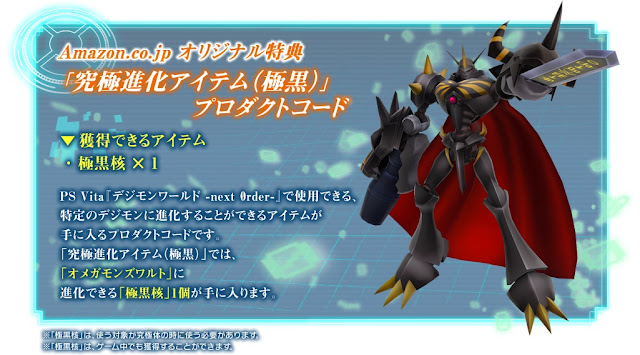 Digimon World -next 0rder- will launch in Japan March 17th, 2016, on the PlayStation Vita for 6,800 yen prior to tax. It is the latest entry in the World series, succeeding directly from Re:Digitize Decode on the 3DS, Re:Digitize on the PSP, and World on the PSX.
Posted by Touya at 11:05 PM