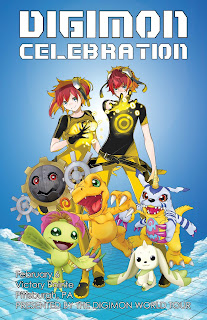 December 2nd, 2015. Digimon fan event organizer Digimon World Tour announced that the first Digimon Celebration event will be held on February 6th, 2016, at the Victory Pointe gaming lounge in Pittsburgh, Pennsylvania. Opening at 11:00 AM, the first Digimon Celebration will host several retro and modern Digimon games, including a demo of Cyber Sleuth, and a Rumble series tournament. (Which Rumble games out of All-Star Rumble, Rumble Arena and Arena 2, will be hosted has not been stated.)

The Celebration will also feature prize raffles, vendors, as well as fanart, cosplay, and trivia contests. World Tour has suggested that some copies of Cyber Sleuth may be given away as prizes at the event, which will serve as a launch party for the game.

Participants will have to pay a $10 entry fee in order to gain access to the arcade and accompanying café. At this time over 160 persons have been invited to participate in the Digimon Celebration.

The Victory Pointe gaming lounge is a barcade located in the South Side of Pittsburgh, which had its grand opening last September. The location hosts regular tournaments for fighting games like Street Fighter and Super Smash Bros., and provides a host of classic arcade games and pinball machines, as well as more recent titles played on game consoles provided by the Pointe's management. Victory Pointe distinguishes itself from competing barcades by being open to minors; the establishment does not serve alcohol out of its kitchen, but does allow its patrons to bring their own drinks, making it accessible to a greater audience than most American barcades.
Posted by Touya at 11:11 AM