This article uses affiliate links. Affiliate links are hyperlinks to product listings on e-commerce websites which redirect the reader to that site; if a reader accesses one of these listings through one of the links below, and/or purchases the item listed, the editor is provided a referral fee and/or commission fee. Affiliate links are labeled when present, and the service being linked to is identified.

Over December 7th Digimon event organizer DIGIMADO uploaded the final results of the December 5th All Digimon Cultural Exchange, providing a detailed list of the top-placing Digimon tamers in the day's tournaments. The top 4 from the Digivice tournament and top 2 from the Digimon Story Cyber Sleuth tournament are presented below. Not listed is the Patamon battler toy that also made it into the top 8, much to the surprise of those attending.

The Cyber Sleuth tournament originally had eight participants, but three dropped from the competition. The previous tournament back in September had six competitors. As at past events, participants were subject to a chess clock ruleset that limited them to 15 minutes to execute all of their turns within, with their timers freezing during their opponent's turn.

Although a Digimon All-Star Rumble tournament was originally scheduled to take place at 6 PM, the competition was ultimately not held due to a lack of participants. While interest in the Digivice toys has grown following the premiere of Digimon Adventure tri., it seems interest in the Rumble games has begun to wane.

Jitenryuu uploaded his team to Twitter, while Sasakani has not. Jitenryuu is one of the better Cyber Sleuth players in Japan; this is his third consecutive first-place win at the DIGIMADO tournament series, having also placed first in last September's tournament and in the March DIGIMADO before that. His in-game name when seen playing online is Saito (サイト). A full translation of his team's setup is given below.

A number of other activities were held at the 12/5 Exchange. Participants could take part in Digimon World X group play, a toy tournament using the Happy Meal Legendary Set spinning tops, and a demo session of several old Digimon Adventure toys, including Digimon Mountain & Digimon Mountain Mini. The date of the next DIGIMADO tournament has not yet been set, but given its quarterly structure, may be expected to take place sometime in March.


Jitenryuu's Cyber Sleuth team (Total Memory Use 150)
In general, Jitenryuu built his team to be less dependent on the Spirit Drain and Physical Drain skills, using Lilithmon's passive SP restoration Support Skill to keep them at a minimum. Several recurring skills are seen below; Safety Guard gives its target a property that prevents them from going down in a single hit, retaining 1 HP if they had more than that prior to the attack hitting. Restore cures all status effects on a single target and recovers a small amount of HP, and Status Barrier nullifies the next status effect that hits its target. In his choice of accessories, Jitenryuu emphasized coverage of the Dot status effect first on his team's cleric (Plesiomon) to prevent their skills from being shut down, and prioritized blocking Panic and Sleep on his other Digimon. His team focused primarily on the Data attribute with several of the necessary Viruses, barely using Vaccine at all due to its prevalence and subsequent vulnerability to Data.

Note that the levels and stats given in the screenshots are mostly irrelevant. All Digimon are scaled to level 50 in multiplayer, and the only stats that make a difference are bonus stats, which are capped at +100 from farm training or 1000 for HP (every 10 points invested gives 100 HP). In order to provide a relevant comparison, the level 1 base stats of the Digimon are given blow, rather than their actual levels. The personalities of the Digimon have not been stated, but Lilithmon and Imperialdramon Paladin Mode are both likely Durable (+10% HP) based on their stats. 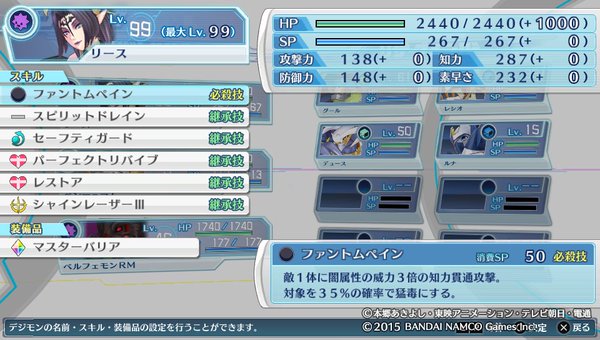 Lilithmon (Wreath)/Virus-Dark (22 Memory)
Ultimate
+1000 HP (Farm training)
Skills: Phantom Pain/Spirit Drain/Safety Guard/Perfect Revive/Restore/Shine Laser III
Accessory: Master Barrier
Lilithmon is one of the most notorious offensive Digimon in the game; excluding HP she has the highest base stat total of any Digimon, even higher than the game's five Super Ultimate Digimon. This high BST is carried entirely by her Intelligence, which is the third-highest after Barbamon and Lucemon Satan Mode. Her Special Skill Phantom Pain is one of the few skills that deals Piercing damage, ignoring all defensive stats as well as regular damage calculation, and instead dealing Dark damage equal to 3x Lilithmon's Intelligence to a single enemy while having a 35% chance to inflict Poison. The prevalence of different kinds of Piercing damage in multiplayer is one reason why Defense is almost never invested in as a stat, and bonus stats are only allocated to Intelligence for offensive purposes--defensively, it's better to invest in HP. Lilithmon herself has one of the lowest HP totals of any fully evolved Digimon, and Jitenryuu invested in HP for this very reason.

Her Support Skill, Lust, converts 10% of any damage dealt by a physical attack against the team into SP. Lust partially negates dependency on Drain skills to restore SP, making Lilithmon both an offensive and defensive pick. 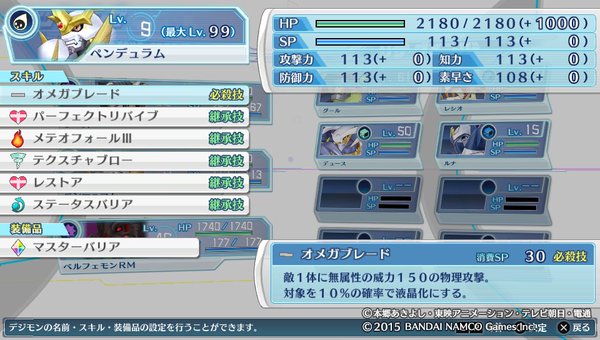 Imperialdramon Paladin Mode (Pendulum)/Vaccine-Light (25 Memory)
Super Ultimate
+1000 HP (Farm training)
Skills: Omega Blade/Perfect Revive/Meteor Fall III/Texture Blow/Restore/Status Barrier
Accessory: Master Barrier
Paladin Mode is a more evenly spread out Digimon, with equally good offensive and defensive stats in all parameters, achieved by sacrificing Speed to distribute his points among other stats. His Omega Blade has a base damage of 150, and a 10% chance to inflict the Dot status effect. Meteor Fall III is exactly half as powerful as Omega Blade, but hits the entire opposing party for physical Fire-attribute damage. Texture Blow is a weak Wind attack that always inflicts Dot if the opponent is not immune to it, locking off their skills and preventing Xros Combos from occurring.

Paladin Mode's Support Skill is Salvation's Defense, which reduces all incoming damage from attacks with an attribute advantage by 15%. 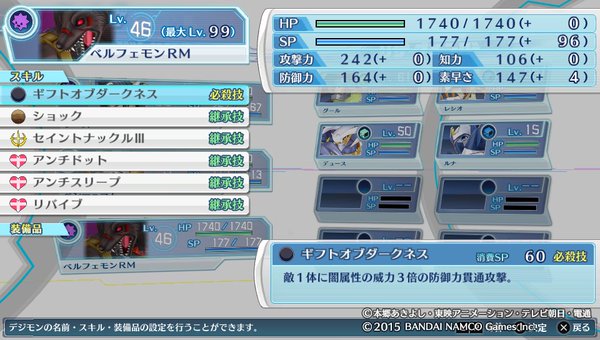 Belphemon Rage Mode (Belphemon RM)/Virus-Dark (25 Memory)
Super Ultimate
+96 SP +4 Speed (Farm training)
Skills: Gift of Darkness/Shock/Saint Knuckle III/AntiDot/AntiSleep/Revive
Belphemon is the other heavy hitter after Lilithmon, being a physical attacker rather than a magical one. Rage Mode has the highest physical attack of any Digimon, and Gift of Darkness rivals Phantom Pain for damage output, dealing single target Piercing Dark damage equal to 3x his Attack stat. Rage Mode isn't nearly as SP efficient as Lilithmon though, as Gift of Darkness has a flat 60 SP cost, which at level 50 he only has enough SP to use one. It's for this reason that Jitenryuu primarily invested his bonus stats in SP; with 96 points in SP Rage Mode would have 180 SP at level 50, enough for exactly three Gifts of Darkness. His high HP and Defense both cater to tanking physical hits, which pair well with Lust's damage-derived HP restoration.

Belphemon Rage Mode's Support Skill, Howl of Wrath, has a 30% chance to inflict Death on any Digimon Perfect-level or lower when a Digimon on his team uses a normal attack. 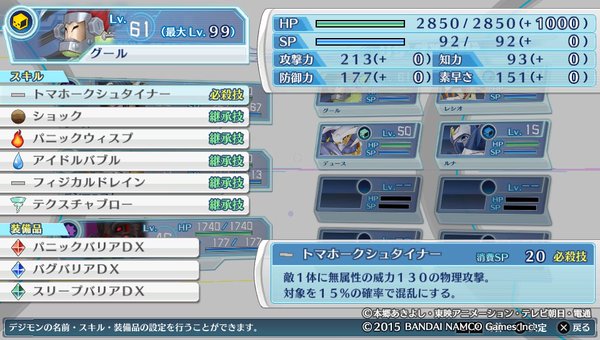 Boltmon (Ghoul)/Data-Electric
Ultimate
+1000 HP (Farm training)
Skills: Tomahawk Steiner/Shock/Panic Wisp/Idle Bubble/Physical Drain/Texture Blow
Accessories: Panic Barrier DX/Bug Barrier DX/Sleep Barrier DX
Boltmon has been alternatively theorized in Cyber Sleuth with Grand Locomon as a counter to Ulforce and Aero V-dramon, because of V-dramon's Vaccine-Wind attribute combination giving him a 3.5x weakness to Data-Electric. The catch to this is that in order to outspeed a V-dramon's Godspeed ability and get three extra turns at the beginning of the battle, one has to have a V-dramon of their own in play and outspeed the opponent's Digimon. Rather than try to balance a complex opening setup with Boltmon and Ulforce to try and take the lead and immediately knock out opposing Ulforces, Jitenryuu chose Boltmon as a status inducer. His high HP make him well-suited to the role, as even Lilithmon can't score a one-hit kill on a fully invested Boltmon unless she puts points into Intelligence rather than HP.

Shock, Panic Wisp, Idle Bubble, and Texture Blow are the respective status inducing skills for the Earth, Fire, Water, and Wind attributes. Shock inflicts Stun, Wisp inflicts Panic, Bubble inflicts Sleep, and Texture inflicts Dot. Boltmon's Tomahawk Steiner has a base damage of 130 and a 15% chance to inflict Panic when it hits.

His Support Skill is Immobility, which gives him innate immunity to the Stun status. 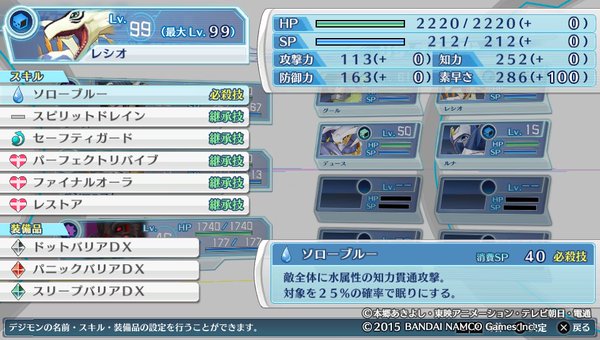 Plesiomon functions like a lower-costed Belphemon Sleep Mode with a decreased probability of going off, but that low memory cost makes him more viable as a cleric as well as a Sleep inducer. 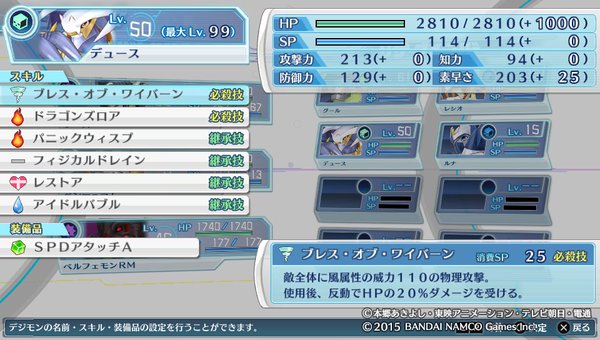 Dynasmon (Dynas)/Data-Wind (22 Memory)
Ultimate
+1000 HP (Farm training) +25 Speed (Accessory)
Skills: Breath of Wyvern/Dragon's Roar/Panic Wisp/Physical Drain/Restore/Idle Bubble
Accessory: SPD Attache A
Breath of Wyvern is a physical attack that deals 110 Wind damage to all foes, then deals 20% HP as recoil damage to the user. Dragon's Roar is a physical attack that deals 55 Fire damage twice, absorbing 50% of the cumulative damage dealt as HP. Dragon's Roar makes Dynasmon an incredibly hardy Digimon even when standing up to Piercing damage, and its damage is further boosted by his Support Skill.

Flying Dragon increases the damage dealt by Fire and Wind skills by 10%, playing back into Dynasmon's two primary elements. When coupled with Imperialdramon Paladin Mode's Meteor Fall III or the Dot-inducing Texture Blow seen above, this significantly increases the damage being spread by Meteor and ensures that Texture Blow's lower base damage isn't significantly taking away from damage that could otherwise be dealt on a turn spent inflicting Dot. 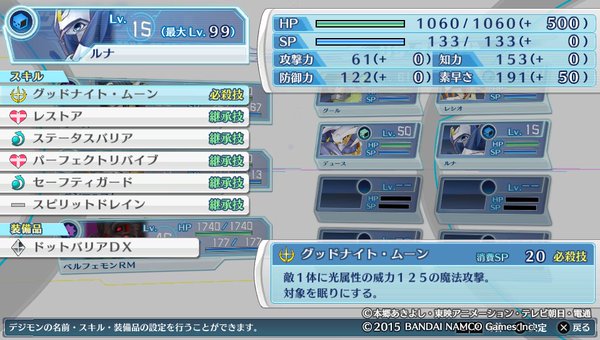 Dianamon (Luna)/Data-Water (20 Memory)
Ultimate
+500 HP +50 Speed (Farm training)
Skills: Goodnight Moon/Restore/Status Barrier/Perfect Revive/Safety Guard/Spirit Drain
Accessory: Dot Barrier DX
Dianamon is an offensively weak Digimon with strong defensive stats designed to assist Plesiomon and Boltmon into spreading Sleep; Goodnight Moon deals 125 magical Light damage to one foe, and inflicts the obvious status effect. Like Lilithmon, Dianamon's HP is extremely low relative to her evolutionary stage, and investing in HP for bonus stats is designed to address that. With 50 additional Speed, Dianamon outspeeds the base stats of every other Digimon, though Ulforce and Lord Knightmon can both outdo her with equal investment.

Her Support Skill is Moonlight Glistening Sword which buffs Water and Light damage by 10%, powering up both herself and Plesiomon.
Posted by Touya at 12:55 PM