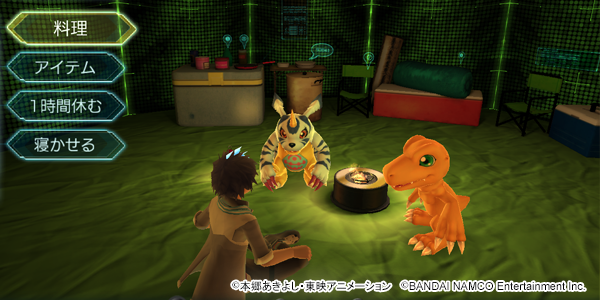 December 21st, 2015. The official Digimon World -next 0rder- title site updated system and character sections today, introducing several new gameplay features and the mysterious character Shouma, who was previously teased in this month's issue of V Jump and in the game's Jump Festa trailer. Shouma is seen carrying an original Digital Monster virtual pet, not unlike those worn by the Takuto and Shiki.

Shouma
"A new possibility, huh...Interesting."
A baby-faced boy carrying a Digital Monster LCD toy. What does he see before those hollow eyes of his...?


The system updates explain how the player can gather items in the Digital World to improve the Village of Beginnings, and how with a fishing rod they can fish in rivers and lakes for ingredients to cook. The new camp feature allows the player to stay in a tent with their Digimon partners during rest hours, where they can cook the ingredients they've found. By recruiting Digimon in the field, the Village of Beginnings can gradually become more prosperous, until it eventually grows into a massive city.

The update includes an overview of classic Digimon World-style training, with the player taking their partners to gyms to train their stats, praising them to increase their attachment to the player, and evolving them once they meet the requirements. The player will be expected to care for their Digimon just as in the original Digimon World, feeding them meals and telling them when to go to sleep.

It also confirms some features discussed in the Japanese players' first gameplay impressions of the demo; the player will receive hints about what evolution their Digimon is on track for when communicating with their Digimon, and which evolution they take is influenced by whether the player praises or scolds them. The player, as a Digimon tamer, will also have a Tamer Level ranking which increases the effects of training, food items, and battle skills.


Digimon World -next 0rder- will launch in Japan March 17th, 2016, on the PlayStation Vita for 6,800 yen. It is the latest entry in the World series, succeeding directly from Re:Digitize Decode on the 3DS, Re:Digitize on the PSP, and World on the PSX.
Posted by Touya at 8:09 AM