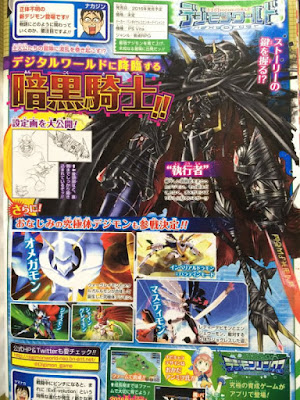 Over November 26th, subculture interest site Otacom uploaded a scan from that week's issue of Weekly Shonen Jump. The issue prominently features Executor, the black Omegamon recently teased on the official website and in last month's V Jump, and also shows several Ultimate-level Digimon that will be in the game.

Imperialdramon Paladin Mode, Jesmon, and Mastemon are all confirmed as possible partners by the magazine, with Mastemon being described as a Jogress of Lady Devimon and Angewomon, just as she was in Cyber Sleuth. Seeing as Omegamon is also referred to in the same scan as a fusion of War Greymon and Metal Garurumon, it's possible that like Omegamon, Mastemon will be the product of an "ExE"-volution.

The issue's profile for Executor is mostly identical to monthly V Jump's profile.

Digimon World -next 0rder- will launch in Japan on March 17th, 2016, on the PlayStation Vita. Those that preorder the game will receive Digimon World's soundtrack as a bonus.
Posted by Touya at 7:31 PM