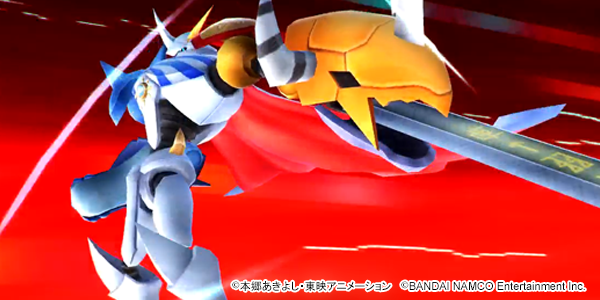 December 4th, 2015. The Digimon World -next 0rder- title site has updated with new informaion on the game's battle system. -next 0rder- uses an evolved form of the AI battle system found in the original Digimon World and Re:Digitize games, where the player's two partner Digimon think and act for themselves with the player-as-tamer's strategic support. In addition to issuing general commands and using items on their Digimon, the player can also make use of the new 0rder Point system.

When the tamer cheers for their Digimon as they make a good move, they accumulate 0rder Points (also referred to as OP) which can then be used as a cost to execute special commands and unleash their Digimon's unique finishing moves. Three special orders have been shown so far:

High-Tension Action (OP Consumption: Medium)
The Digimon's HP will automatically recover in battle, and their power will increase.

Direct Support (OP Consumption: Small~Medium)
The partner Digimon will immediately execute an attack at that location; if used with the right timing, multiple enemies can be hit simultaneously.

Finishing Move (OP Consumption: Great)
The Digimon uses its own unique finishing move, each of which gets its own specially animated scene. 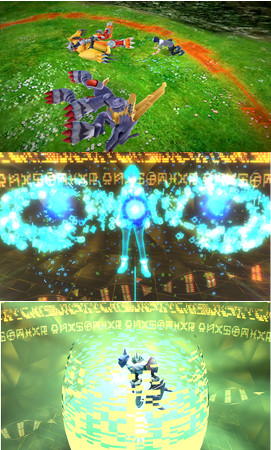 Additionally, tamers can use 0rder Points instead to activate "ExE"-volution, a type of evolution specific to -next 0rder-. Triggering "ExE"-Volution requires requires both OP and strong bonds to one's partners; under special conditions, the player's partner Digimon can evolve together and resurrect.

The screenshots presented and wording strongly imply that those "special conditions" are defeat in battle. The player and their Digimon are shown collapsed on the ground, and the use of "revival" (復活 fukkatsu) implies death being necessary for "ExE"-volution. Additionally, the screenshots appear to confirm past speculation that the tamer will fuse with their Digimon in order to create the evolution, as they are shown to join in the evolution sequence.

Digimon World -next 0rder- will launch in Japan exclusively on the PlayStation Vita in 2016.
Posted by Touya at 7:58 PM