December 19th, 2015. Among the preorder bonuses uploaded to the official Digimon World -next 0rder- title site is a tracklist for the remastered Digimon World soundtrack that will be included with first print copies of the game, as well as a set of four short music samples of the remastered OST. These tracks are Let's Walk Together (used for Gear Savanna at night), the iconic Earth and the Blue Sky (Gear Savanna day), Rejection Fight (used for battles against Digimon that refuse to return to the Village of Beginnings), and Digital Spirit (battle with Mugendramon). Fans can listen to the remastered tracks on the site. 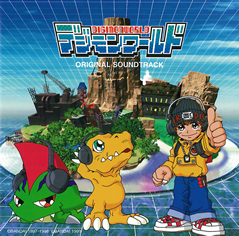 Digimon World's soundtrack was originally composed by Yamada Kouji (山田耕治) and Ishii Yuko (石井祐子), employees of BEC (Bandai Entertainment Company, formerly a subsidiary of Bandai and now of Bandai Namco Holdings). Yamada has been working in game soundtracks for over twenty years, currently specializing in chiptune and other retro gaming music.

Digimon World -next 0rder- will launch in Japan on March 17th, 2016, for the PlayStation Vita. It will retail for 6,800 yen. It is the latest entry in the World series, succeeding directly from Re:Digitize Decode on the 3DS, Re:Digitize on the PSP, and World on the PSX.
Posted by Touya at 2:42 PM