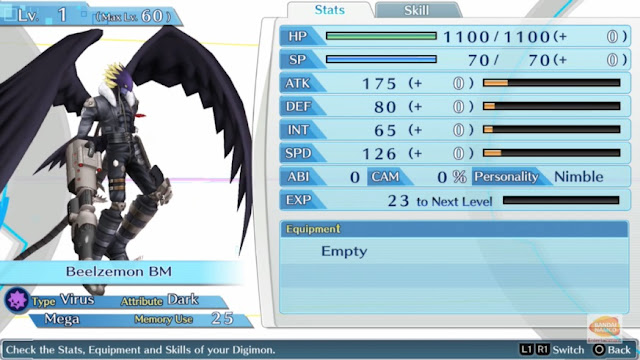 December 1st, 2015. In today's Digimon Story: Cyber Sleuth livestream, Bandai Namco US briefly showed the two new Digimon added as preorder DLC to the game. While their Support Skills were not shown, their base stats were; using data from the Japanese edition of Cyber Sleuth, we've provided a direct comparison of them with their base forms below. Note that because the stream's Beelzebumon BM had a Nimble personality, its Speed was boosted by 5%; the stats below are corrected to have the personality boost not applied. 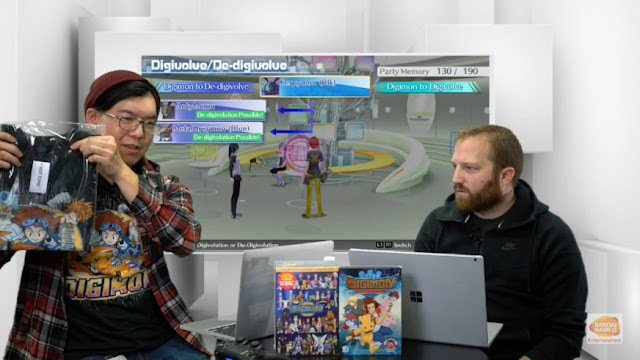 At its peak 1,196 simultaneous viewers were tuned into the Cyber Sleuth livestream, more than double what the European stream brought in late last month. Several giveaways were done over the course of the stream, including Digimon Adventure T-shirts, Digimon 3DS and Vita cases, as well as box sets for the Frontier and Savers seasons of the anime series.

Statistically, Blast Mode is a straight upgrade over the original but with a higher memory cost attached; the original Beelzebumon was one of the only viable alternatives to using Barbamon as an offensive Virus-Dark Digimon, but suffered from low Intelligence that made him difficult to defend versus magical attackers in spite of having an above average HP stat. Gluttony was a double-edged sword because its effect is party-wide, meaning each party member would lose 5% of its HP and gain 5% attack whenever their turn came up. It's possible that the skill will be replaced with something less resource-intensive for Blast Mode. 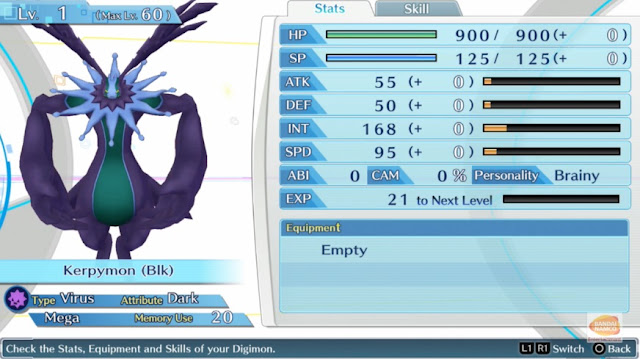 Cherubimon Vice thus far is a horizontal change from Virtue, both gaining and losing 15 points from the original. Buffing Intelligence has the advantage that it simultaneously increases defensive and offensive parameters, as Intelligence is a catch-all stat for both magical attack and defense. The loss of Speed isn't a particularly significant one in terms of Cherubimon's placement in Speed tiers either, as the majority of threats in the Cyber Sleuth metagame have a level 1 Speed stat of 115 or higher, so Cherubimon was already acting after the majority of opponents in the first place. The main negative aspect of the change is that Cherubimon became Virus-Dark rather than Vaccine-Dark; Digimon usually treats Vice as a corrupted Vaccine rather than being purely Virus, and in this case making him Vaccine-Dark would provide the only instance of such an attribute typing after Kuzuhamon. Vaccine is a defensively favorable typing due to the majority of Piercing damage in the game coming from either Virus or Vaccine-attribute Digimon, and because this type of damage ignores Intelligence and Defense, attribute advantages are sometimes the only way to prevent a one-hit kill.

The original Cherubimon Virtue paired well with the first incarnation of Beelzebumon because of Meditation negating the 5% HP loss from Gluttony, turning the skill into a free 5% Attack increase every turn. However, part of the reason this combination worked was because of the opposing attributes of Virtue and the original Beelzebumon, as this made it impossible for an opponent to field a Digimon that could gain an advantage against one without having a dramatic disadvantage versus the other. Purely on the basis of sharing the exact same attributes, Vice and Blast Mode don't pair nearly as well as Virtue and base Beelzebumon.

Digimon Story: Cyber Sleuth will launch in North America on February 2nd, 2016, and in Europe on February 5th, 2016, on the PlayStation 4 and Vita.
Posted by Touya at 7:32 PM