The Digivice Ver. 15th Will Be Reprinted in March 2016 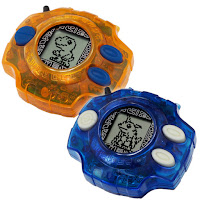 Over December 25th, Premium Bandai tweeted that the Yagami Taichi, Ishida Yamato, and Anime Original Color models of the Digivice Ver. 15th will all be reprinted in March 2016 to coincide with the recent preorder launch of the D-3 Ver. 15th. Preorders for the second run of the Ver. 15th are currently open until the launch date. The price of the device is set at 9990 yen, approximately $83 at the current exchange rate, and unlike the D-3, no specific limit on orders has been set. Tamers will have to order their Ver. 15ths before the launch date to receive them, and those outside of Japan will have to go through a proxy to purchase the Digivices.

Premium Bandai is Bandai's dedicated web shop, which sells directly to consumers rather than to toy stores. From August 26th to December 25th, 2014, Bandai sold the Digivice Ver. 15th in orange and blue to commemorate the fifteenth anniversary of Digimon Adventure, and the Anime Original Color Ver. 15th later became available from March 3rd to May 11th, 2015. The AOC Digivice shipped with a flyer for the D-3 Ver. 15th, a limited six thousand units of which are currently available for preorder and will ship in June 2016. The Ver. 15th series has helped revive a long tradition of play in the Digimon fandom, becoming one centerpiece for the fan-organized DIGIMADO tournament series.
Posted by Touya at 12:15 PM