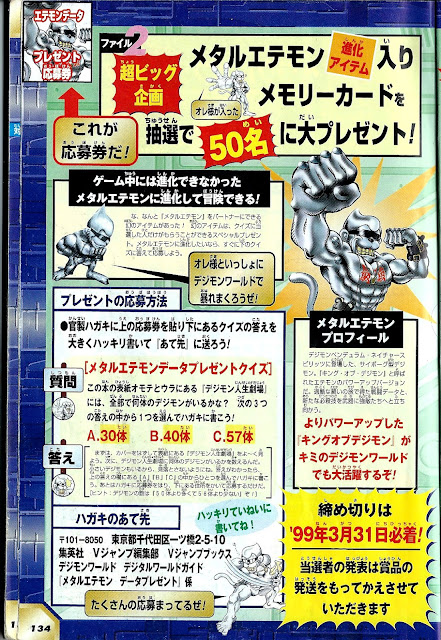 On February 23rd, 1999, Shueisha published its official Digimon World guide, the pages of which contained the only known method of raising Metal Etemon. Earlier this year we took apart many of the rumors surrounding Metal Etemon, a Digimon programmed into the game but which can't be obtained without the use of cheat codes. The truth of the matter is that Metal Etemon's evolution item, the Metal Banana, was only obtainable through a giveaway on page 134 of this Digital World Guide, published under Shueisha's V Jump Books imprint.

According to the flyer, 50 participants were selected to be mailed a memory card containing the Metal Banana data. Fans participated by mailing in a "Metal Etemon Present Application Ticket" (seen in the top left corner of the page) along with their answer to a quiz from the page written on their postcard. The quiz question is as follows;


Metal Etemon Data Present Quiz
On the surface of book's outside cover binding is a "Digimon Life Theater," how many Digimon are there in all? From among the following 3 answers, choose 1 and write it on your postcard!
A. 30 kinds
B. 40 kinds
C. 57 kinds

(First, look closely at the cover's "Digimon Life Theater." Then, count the number of Digimon in the "Digimon Life Theater." There are small Digimon too, so don't overlook any. Once you know the answer, write either A, B, or C on your postcard. After that mail your postcard along with your application coupon to the below address. [Hint: The number of Digimon is "Bigger than 50 but smaller than 58!"]

The quiz is referring to a set of monochrome stickers beneath the book's jacket, attached to the binding. Metal Etemon himself appears on the giveaway page, inviting tamers to "Run wild with me through Digimon World!" and saying further down that he'll be waiting for fans' many submissions. The contest ran for just one month, ending on March 31st, 1999. Metal Etemon does not appear in the guide's list of Digimon or their stats, but the strategy guide did include a brief profile of him;


Metal Etemon Profile
A cyborg-type Digimon which debuted in Digimon Pendulum Nature Spirits. They are a powered-up version of Metal Etemon called the "King of Digimon." On a journey of rigorous battle, they acquired combat data, new finishing moves, and weapons to face formidable opponents.
The powered-up "King of Digimon" appears in your own Digimon World!