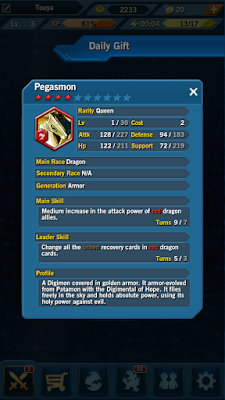 January 27th, 2016. This morning the English translation of Digimon Crusader, Digimon Heroes, launched worldwide on both Android and iOS platforms. In a surprise move, the app abandons many of the conventional English names for various Digimon, ditching many older names in favor of direct translations from Japanese. For example, Pegasusmon is now called Pegasmon, Armageddemon is now called Armagemon, and DemiDevimon is now called Picodevimon. Armor Digi-Eggs now go by their original Japanese names, Digimentals.

Although for many years Digimon has had strong advocates of adopting the Asian-English names used by Bandai of Japan in the Digimon Reference Book and merchandise, these names are not exactly the same as those used in Japan. For example, "Picodevimon" is normally parsed as "Pico Devimon." Some anomalies also remain in the translation, with the app using "Digifuse" (a dub name for DigiXros) for what Crusader just called "strengthen."

Players in Digimon Heroes take on the role of a Digimon tamer called to File Island by Angewomon to save it from Armagemon. In-game the player battles by matching cards of different colors, which power up Digimon of the same color.