Han Megumi to Portray Kuzuhamon in Digimon World -next 0rder- 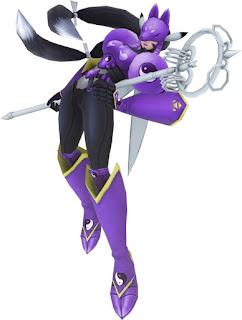 
Kuzuhamon
"Lowlifes ought not to form such humble ideals."
A powerful enemy appearing before the protagonists. Questioning the state of the Digital World, she is a Ultimate-level Digimon assisting Shouma's plan. With a calm disposition, she fights alongside Gaioumon, but often disagrees with his way of thinking and clashes with him in small ways.

Those that preorder the game will get access to five special DLC Digimon, a remastered copy of the 1999 Digimon World soundtrack, and two original Vita themes, "ver. Nostalgic" and "ver. Dot." Theme ver. Dot features a montage of original Digimon LCD sprites, while theme ver. Nostalgic turns the screen into the layout of a Digital Monster virtual pet.
Posted by Touya at 7:14 PM