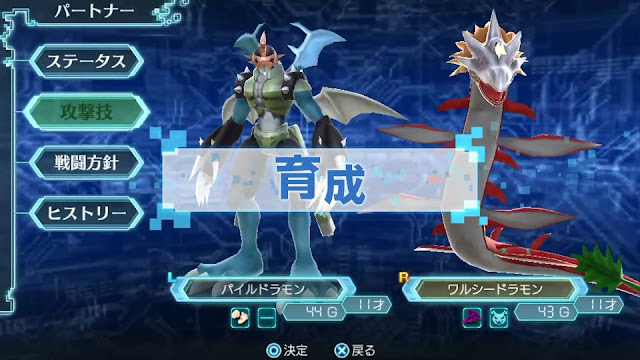 January 21st's preview video and livestream for Digimon World -next 0rder- brought with it a number of reveals, among them a huge number of gameplay mechanics that were not previously covered in any detail. The most dramatic reveal by far is that of the tech and type system. Like in the original Digimon World, the Digimon in -next 0rder- all have at least one type that reflects what kind of techniques they can learn from battle. But unlike the first game where Digimon could have up to three types at once, in -next 0rder- Digimon have a maximum of two types.

For example, in the above screenshot Paildramon is Battle-type and has no secondary typing, so his second box is empty. There are nine types in total, which include the original seven (Fire, Ice, Air, Plant, Battle, Mech, and Filth) plus the two introduced by Re:Digitize (Light and Dark). Waru Seadramon has a second type not seen on the in-game chart below. What this means is unknown; the chart from the PV shows that Waru Seadramon can use all seven Dark techs, as well as Air 2-4 and 5-6.

There are seven techs of each type, with many of them being returning moves from the first game. Heat Breath is similar to the Fire Breath tech from Re:Digitize, while Fire Wall, Flame Storm, Roots Bind,  Electric Shoot, Wing Shoes, Dark Spirit, and Mach Jab are all returning from that game. These techs even share the same ranks as their Re: counterparts.

The Dark and Light attributes in Re:Digitize only comprise three techs each, while in -next 0rder- they cover seven. In addition to those listed above, a tech resembling Meltdown was seen used by Imperialdramon in the Jump Festa trailer. The stats for several techs were also leaked by the preview video:

Like in Digimon World, finishing moves are also categorized as a type of tech, though they are not transferable between Digimon. Waru Seadramon's is Evil Icicle: 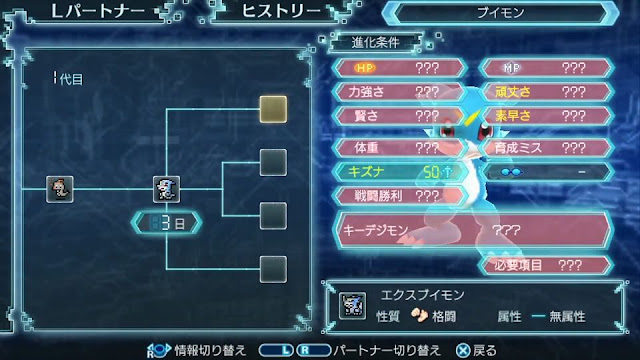 The game's evolution parameters were also briefly shown in the trailer. Evolution is affected by core stats (HP, MP, Attack, Defense, Brains, Speed), Weight, Care Mistakes, Bond (キズナ Kizuna), Discipline, Battle Victories, and Key Digimon. "Key Digimon" has not been explained in any of the game's press releases, but it may mean that the other partner Digimon can be a condition for evolution. In addition to these stats, Digimon have Age, reflecting how many in-game days old they are. 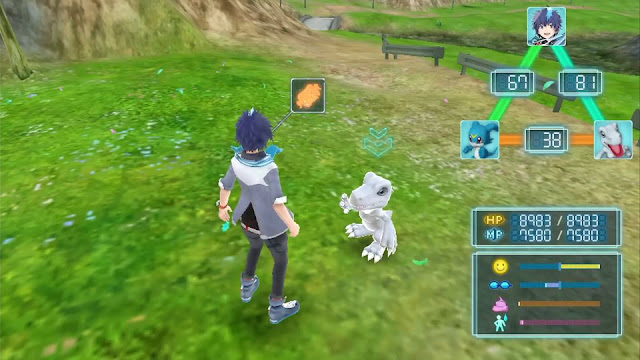 The cap for HP and MP seems to be five digits, 99999, but the highest seen at any time is 8983. In addition to their battle stats, Digimon have Happiness, Discipline, Virus, and Tiredness stats; these stats were all present in the original Digimon World, but Tiredness was invisible in that game and only made apparent when a Digimon revealed a sweatdrop. It's likely that Virus once again increases as a result of pooping outside of a toilet, and like in past games, maxing out the Virus gauge at around ~16 poops will cause a Digimon to evolve into Scumon.

The Bond stat displays how close the player is to their Left and Right Digimon, as well as how close those Digimon are to one another. In this screenshot, Takuto has a bond of 67 to V-mon, 81 to Yuki Agumon, and V-mon and Yuki Agumon have a bond to one another of 38. Based on what's been said about EXEvolution, it seems like the bond stat has to be strong between all three of them for EXEvolution to be possible. The cap for Bond is in the three digit range. 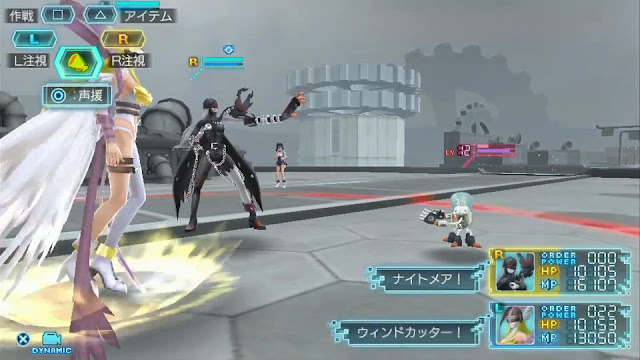 In battle the square button allows the player change their strategy, spending Order Power to issue new orders to their Digimon. Triangle lets them use recovery items like in the original Digimon World, and L and R shift whether the camera focuses on the L Digimon or the R Digimon. Circle causes the player to cheer, which increases their Order Power, building up towards being able to spend the OP on strategies. Issuing orders brings up a circular menu in which the player chooses which techniques they want the Digimon to use; the menu remains open for just 5 seconds. In addition to techs, the player can issue some special orders like "MP Regeneration" that give the Digimon a passive effect, and spend OP on using their Digimon's finishing move.

How many Order Points a tech costs to order is relative to its power. For example, Fire Tower costs 40 OP to order, while Fire Wall costs just 20. One change from past games seen in the stream is that all HP recovery items now automatically revive Digimon that are knocked out, and they seem to work on both Digimon simultaneously. 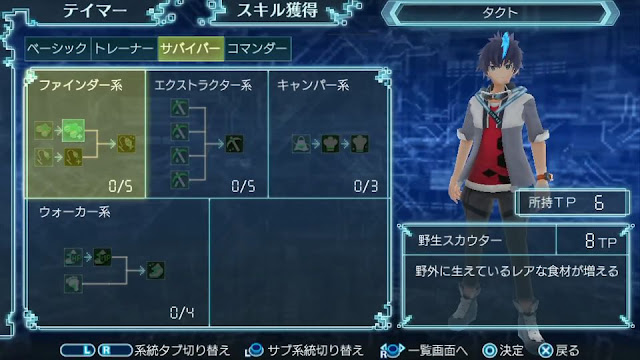 Tamer Level in this game affects which Tamer Skills the player has access to, which are divided into Basic Skills, Trainer Skills, Survivor Skills, and Commander Skills. These are further divided into subcategories; Survivor Skills include the Finder category (influences fishing and rare item drops), Extraction (material collection from spawn points), Camper (cooking), and Worker. To learn a skill, the player spends Tamer Points to purchase it in a menu. There are 71 Tamer Skills to learn in all, and the player increases their Tamer Level with experience points earned from various activities, gaining TP as they level up. 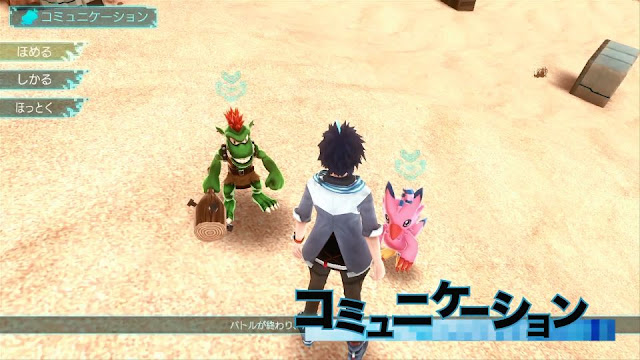 In this screen, the top option is "Praise," the second one is "Scold," and the third is "Let them be." Praise increases Happiness at the expense of Discipline, while Scold does the reverse. In previous games, if a Digimon was scolded after refusing to take an item, both their Happiness and Discipline would increase. 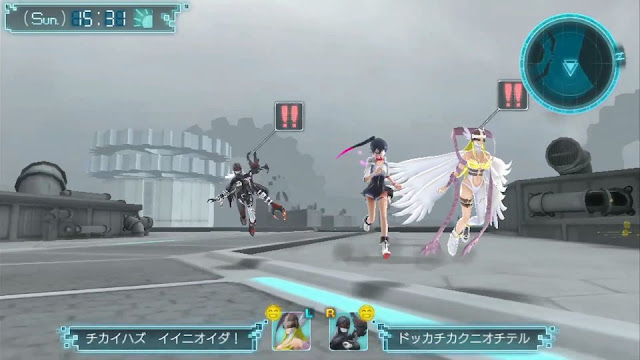 Digimon in -next 0rder- can detect items and enemies in the field, and will alert the player with messages like "I smell something good nearby!" or "A strong enemy is approaching!" 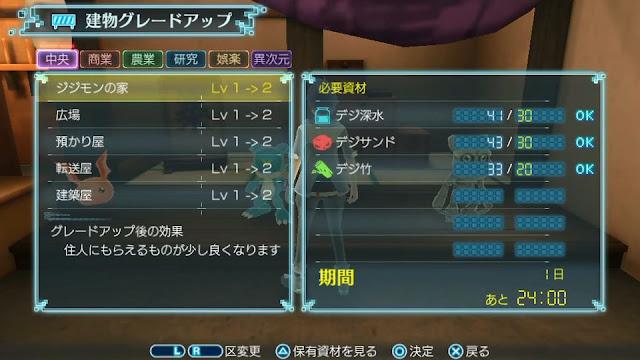 The destroyed Village of Beginnings/File City has been rebuilt in -next 0rder- as the town of Flowtier (フローティアFurootia). Flowtier is divided into six districts, and materials can be used at the village to upgrade the facilities of each district. For example, to upgrade Jijimon's house in the Central District from level 1 to 2 the player needs 30 Strong DigiWater, 30 DigiSand, and 20 DigiBamboo. 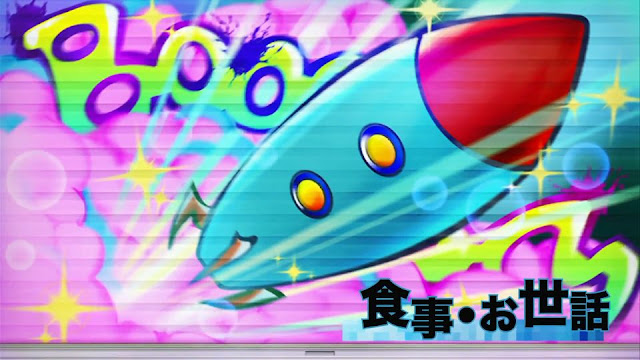 Finally, when pooping a shutter covers the screen as it did in Re:Digitize and Decode.

Digimon World -next 0rder- will launch in Japan March 17th, 2016, on the PlayStation Vita for 6,980 yen (7,539 JPY after tax). It is the latest entry in the World series, succeeding directly from Re:Digitize Decode on the 3DS, Re:Digitize on the PSP, and World on the PSX. Those that preorder the game will get access to five special DLC Digimon, a remastered copy of the 1999 Digimon World soundtrack, and two original Vita themes, "ver. Nostalgic" and "ver. Dot." Theme ver. Dot features a montage of original Digimon LCD sprites, while theme ver. Nostalgic turns the screen into the layout of a Digital Monster virtual pet.
Posted by Touya at 2:43 PM