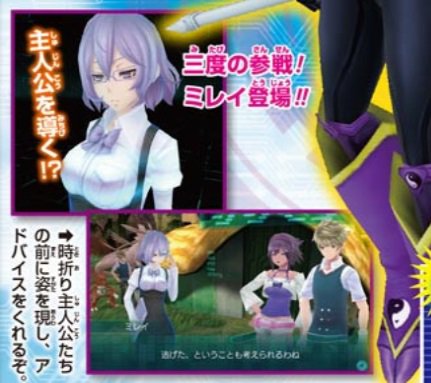 January 25th, 2016. Japanese Digimon fan @freedommon tweeted an image from Thursday's issue of Weekly Shounen Jump magazine, revealing that Mikagura Mirei of Digimon World Re:Digitize and Digimon Story Cyber Sleuth will also be making an appearance in the upcoming Digimon World -next 0rder-. Mirei's most recent appearance in Cyber Sleuth was as the attendant to the DigiLab, assisting the player in that game by helping coordinate certain quests and advising them in raising Digimon. Mirei's role in -next 0rder- remains enigmatic, but the issue states that she appears before the protagonists to advise them.

The issue of Weekly Shounen Jump also features Kuzuhamon as a key character, one of two Digimon seen accompanying Tsuzuki Shouma in the most recent trailer.

Digimon World -next 0rder- will launch in Japan March 17th, 2016, on the PlayStation Vita for 6,980 yen (7,539 JPY after tax). It is the latest entry in the World series, succeeding directly from Re:Digitize Decode on the 3DS, Re:Digitize on the PSP, and World on the PSX. Those that preorder the game will get access to five special DLC Digimon, a remastered copy of the 1999 Digimon World soundtrack, and two original Vita themes, "ver. Nostalgic" and "ver. Dot." Theme ver. Dot features a montage of original Digimon LCD sprites, while theme ver. Nostalgic turns the screen into the layout of a Digital Monster virtual pet.
Posted by Touya at 10:43 PM