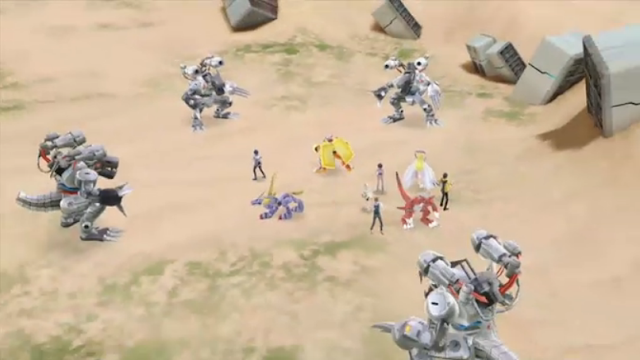 
"Welcome to the Digital World--or should I say, 'welcome back'?"
The trailer features several gameplay mechanics described in the promotional materials released up to now, including camping, ExE-volution, and the 0rder System. An English subtitled version is being worked on, and several recordings from the stream are currently being processed. 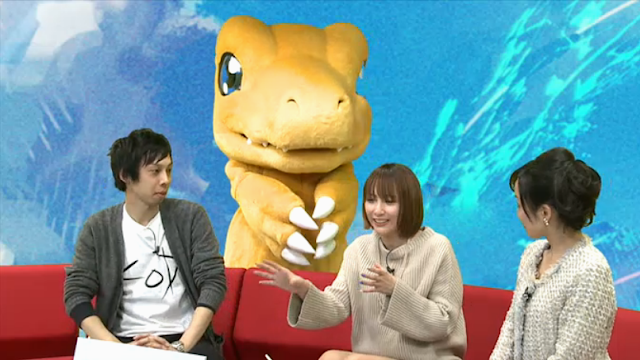 The stream was divided into two halves, with the first hour devoted to playing the original Digimon World along with its producers, and the second to playing -next 0rder-. This is the first real gameplay seen on camera; several mechanics previously leaked from first gameplay impressions at Jump Festa 2016 were seen in the stream, including the newly-introduced evolution hints the player gets when praising or scolding Digimon. The stream ended with the Agumon mascot character asking Aoi Eir for her autograph, and an overview of various current and upcoming merchandise. 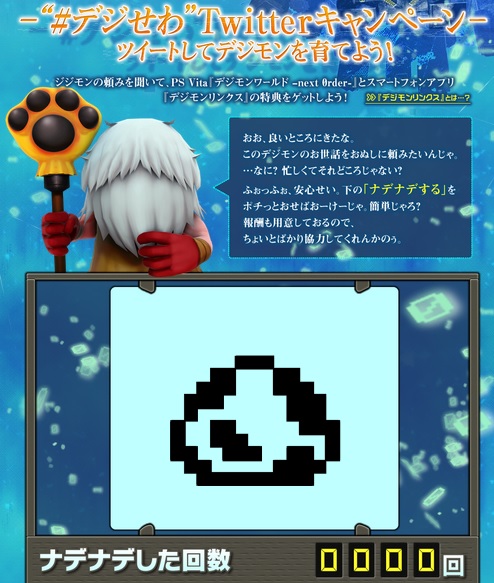 A few hours prior, the -next 0rder- title site updated with special information; a new "Nade-Nade" (lit. "Rub-rub") campaign is beginning. Previously used to promote Digimon Adventure tri., Nade-Nade campaigns require fans to rub a Digitama, which will hatch into a Digimon with new announcements once it has passed a certain number of rubs. Originally this took the form of once-per-day clicking, but this newest campaign has players send out premade tweets and other social media posts to Nade-Nade. Instead of the new information bumps of previous campaigns, the new Nade-Nade rewards players of -next 0rder- and Digimon Linkz with in-game items for reaching certain thresholds. The first threshold rewards players with a Chain Melon (an item which extends a Digimon's lifespan) for -next 0rder-, and a Digistone for Linkz.

In its original incarnation, Nade-Nade was easily the most despised aspect of Adventure tri.'s promotional campaign, as Bandai had been known to manipulate the results, introducing periodic freezes on the counter to prevent the Digitama from hatching too quickly, and introducing disproportionate multipliers (i.e., making every click count for 12, 20, or even 100 instead of 1) towards the end of a campaign to force the Digitama to hatch on a schedule while giving the illusion of fan participation. Past announcements have been effectively scheduled to come out on specific dates using these methods.

Digimon World -next 0rder- will launch in Japan March 17th, 2016, on the PlayStation Vita for 6,980 yen (7,539 JPY after tax). It is the latest entry in the World series, succeeding directly from Re:Digitize Decode on the 3DS, Re:Digitize on the PSP, and World on the PSX. Those that preorder the game will get access to five special DLC Digimon, a remastered copy of the 1999 Digimon World soundtrack, and two original Vita themes, "ver. Nostalgic" and "ver. Dot." Theme ver. Dot features a montage of original Digimon LCD sprites, while theme ver. Nostalgic turns the screen into the layout of a Digital Monster virtual pet.
Posted by Touya at 6:09 AM