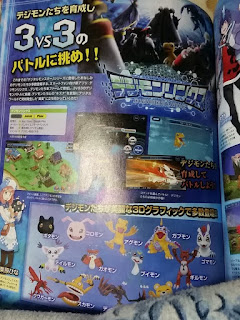 A spread from the December 28th issue of AppliSoft magazine uncovered by Japanese Digimon fan @morimoriurf over January 9th revealed new key art of Digimon Linkz navigator Kurihara Hina hatching a Botamon. The upcoming smartphone game will be focus on raising Digimon to have 3-on-3 battles, and will be available both in the App Store and on Google Play.

Linkz was originally announced for a 2015 launch, but was delayed due to production issues. More than fifty thousand people have preregistered for the game, and as part of its promotional campaign Bandai has set up a special LINE messaging account for it that sends information about the game to users' phones.
Posted by Touya at 10:53 AM