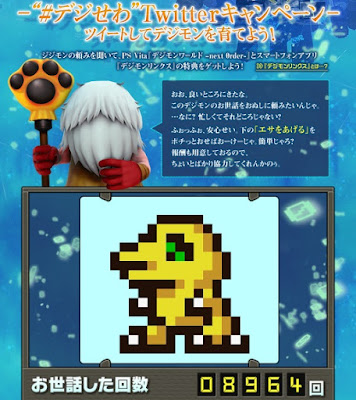 January 26th, 2016. Just an hour after we reported that Bandai's online virtual pet had evolved to Koromon, the Digimon crossed over the 8000 tweet threshold necessary evolve to its Child stage, Agumon. This has unlocked the next reward tier for Digimon World -next 0rder- and Linkz; every time the Digimon evolves, fans are rewarded for participating in the event by earning additional in-game Chain Melons (for -next 0rder-) and Digistones (for Linkz).

As of now Agumon has accrued a cumulative 8,964 tweets, and will evolve to Adult at the 12,000 mark. The current total number of rewards being given is three total Chain Melons and seven total Digistones. At the Adult level, fans will earn one additional Chain Melon and eight additional Digistones.