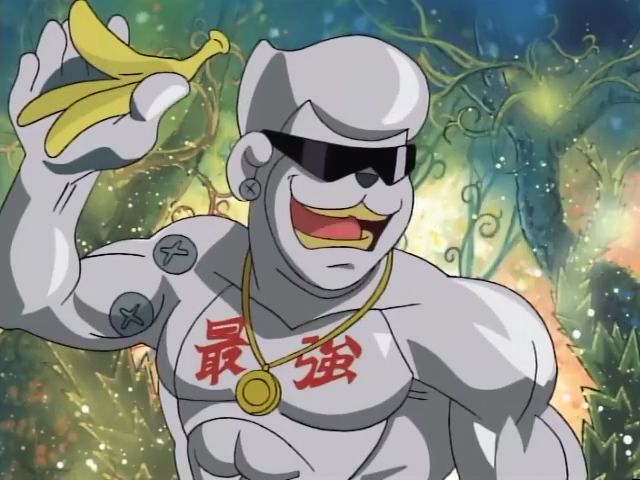 January 28th, 2016, will be the seventeen-year anniversary of the virtual pet-open world game Digimon World. In the time since its original launch, tamers around the globe have been baffled by one secret that seemed destined to never be unlocked. Digimon World has a fully functional Metal Etemon programmed into it as a Perfect-level Digimon, complete with a full list of learnable techniques, VS mode sprite, and a working finishing move. Yet Metal Etemon doesn't evolve naturally from any Digimon in the game, and his specific evolution item "Metal Banana" can't be obtained without hacking. This Etemon variant isn't necessary to complete the evolution chart, or to earn the Digimon Master medal. Functionally Metal Etemon is a Vaccine-attribute reskin of the original Etemon, sharing his Dark Network finisher and movepool, and if the player evolves to Metal Etemon before unlocking Etemon via a hacking device then the Metal variant will take Etemon's place on the evolution chart.

On the Japanese side of the Pacific rumors have pervaded message boards, Q&A pages, and fansites alike for years that tamers could evolve their partner into Metal Etemon by lining up the roulette wheels while doing waterfall training at the Green Gym. The rumors were fueled by Metal Etemon's appearance in Digital Card Battle, where the Green Gym waterfall was the background image for his trading card. On the American side, various methods of obtaining the Metal Banana like buying it from Etemon's shop after purchasing fifteen to twenty-five Golden Bananas, or it having a probability between .01% and 5% to appear randomly in his shop have been circulated but never substantiated with images. Speculation and investigation has continued for so long in part because of how many new things are discovered about Digimon World from year to year--most famously, the exact evolution criteria for Heracle Kabuterimon were only discovered in 2011 by Orange Fluffy Sheep & MechaBread, and in 2013 Chain Melons were confirmed to spawn in Gear Savana for the first time. Official guides have been notoriously unreliable.

Even some of the most recent efforts to create a dedicated game modification tool for Digimon World by veteran Digimon hacker Romsstar have turned up no secret methods of unlocking the Metal Banana. It seemed as though this was just one element of the game not implemented for unknown reasons, fully complete and still dummied out. But on one long-neglected corner of the internet, an answer has lied waiting for many years. 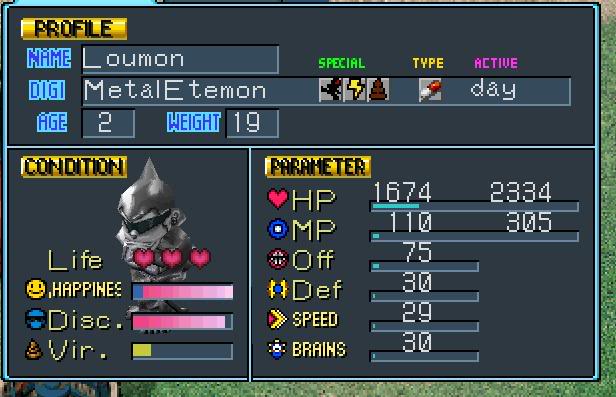 V-Tamer's Residence, first established in 1999 and updated continuously until 2009, has been a premiere source of information for both Japanese and international fans since its inception. The site was known for leaking profiles of various Digimon from magazines, trading cards, miscellaneous toys and products, which would often be very close to their final profiles in the Reference Book years later. It hosted a comprehensive encyclopedia of virtual pets, as well as a complete timeline of Digimon products and release dates up through 2006, including character CDs, obscure video games, and various toylines. And on VTR's page for the year 1999, one line of text stands out;


1999年1月
プレイステーションソフト「デジモンワールド」の激レア・メタルエテモンデータ入りのメモリーカードプレゼントなどが行われた。
January 1999
Memory cards containing ultra-rare Metal Etemon data for the PlayStation Software Digimon World were given out as presents, among other things. 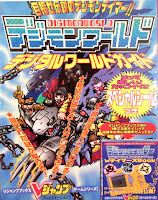 There you have it. Metal Etemon was at one time legitimately available in the Japanese Digimon World; but rather than being available through traditional evolution or an obtainable item, he was akin to an event Pokémon like Mew. Tamers had to get the Metal Banana item from one of the original distribution memory cards, or copy the data from a friend's card. VTR doesn't list where the memory cards were given out, but one other source has corroborated V-Tamer's information and provided an explanation of how the memory cards were given out.

According to an anonymous user posting on the Japanese-language message board 2channel back in 2006, Metal Etemon was originally a raffle prize given away in V Jump's guide for the game (pictured at right). Raffles of this type are very common in Japanse children's franchises; presumably fans that purchased the guide would mail in an attached slip to get one of the memory cards. The mystery does go a little deeper than this, however. Metal Etemon was not the only missing secret in Digimon World.

There are two other Digimon--Panjyamon and Gigadramon--that are similarly not on the evolution chart, not obtainable in-game, have unused evolution items programmed in, and are likewise fully functional. For years these Digimon have been the subject of rumor, with Panjyamon being conflated with Saber Leomon by the English-speaking fanbase sometime around 2000, and sinking into legend as one of "the three Megas." Such rumors also gave way to later stories of an Electo Ring item capable of evolving Digimon into "Kaminarimon," and of a Moon Mirror item to evolve to Were Garurumon. (Were Garurumon was later proven to exist as an arena sprite, with no proper skeleton, skin, or technique list programmed. While the Electo Ring appears in the game, Kaminarimon is only named, with not even an arena sprite appearing.)

The existence of Metal Etemon, Gigadramon, and "Saber Leomon" was seriously doubted by fans unable to replicate the rumors, and as the years have worn on more recent walkthroughs and FAQs dropped their names entirely, not even making reference to the Metal Banana, Giga Hand, and Noble Mane evolution items. The Digimon (barring Saber Leomon) do exist, taking up the slots in the game's data structure immediately after the last normal Digimon (Mega Seadramon) but before the arena-exclusive Vamdemon and NPC/enemy-only Digimon. Panjyamon's and Gigadramon's level of completion is much greater than that of Were Garurumon; since they're reskins of existing Digimon, these two aren't missing field animations in the way that Brachiomon or Mugendramon are. 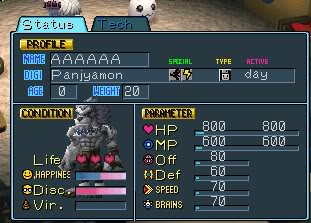 While no source has confirmed this, based on Metal Etemon's historical role it's likely that all three Digimon were at one time intended to be given away as prizes. The promotional status of the three Digimon makes sense, considering their relationship to their counterparts in the game; Metal Etemon (Vaccine), Panjyamon (Data), and Gigadramon (Data) differ from Etemon (Virus), Leomon (Vaccine), and Megadramon (Virus) only in their skins and attributes, with identical techlists and finish commands. There's nothing setting them apart from the originals aside from visual appearance and the areas they can access--which is the perfect kind of limited time promotion for a game like Digimon World, that had a multiplayer component where tamers would show off the Digimon they raised.
Posted by Touya at 11:42 AM