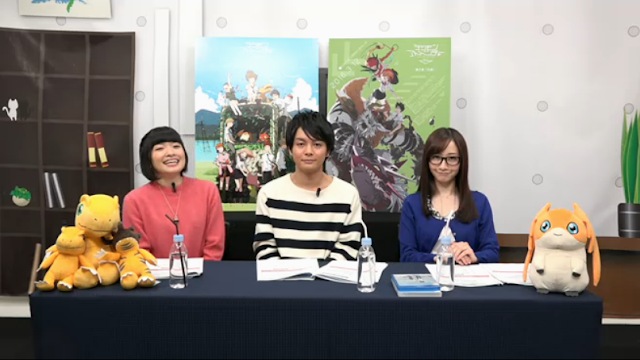 January 15th, 2016. In today's special livestream, hosts Yoshida Hitomi, Enoki Junya, and Arakawa Miho shared two short preview videos for the second and third chapters of Digimon Adventure tri. The first video was for Ketsui (Determination) featured Hackmon and an unknown new character, while the second video revealed the title of the third film, 告白 Kokuhaku (Confession) and featured Patamon saying "goodbye" to Takaishi Takeru. The second video had no voice track, and was only subtitled. The identity of the new character cannot be determined at this time; the viewers in the Nico live chat speculated that it was the Digimon Kaiser, though there were few visual similarities between the two.

A recording of the stream is being processed and will be uploaded later today.

Update: Toei Animation has uploaded both trailers back-to-back to YouTube.