"Was the World Waiting For You? Or Were You Waiting For the World?" 1/21 Famitsu Shows New -next 0rder- Promo

January 6th, 2016. The 1/21 issue of Weekly Famitsu magazine was leaked today by All Games Beta; the magazine contains a massive blitz of coverage written to promote the upcoming Digimon World -next 0rder-, out March 17th. While most of the information given consists of recaps of the official character profiles and preorder bonus info, the magazine also includes a new promotional illustration by character designer Taiki, showing the core cast and the game's camping feature.

The quote featured in the illustration is "Was the World waiting for you? Or were you waiting for the World?", a line that has just recently come into prominent use in the game's TV commercial and Jump Festa trailer. Female protagonist Shiki is shown cleaning poop--a notorious feature of the World series--while male protagonist Takuto and their friend Kouta cook meat over a campfire.

According to Famitsu, in the Digimon World series' latest work, players will assume the role of a Tamer raising their two partner Digimon while adventuring through the Digital World. By training their partners' HP, MP, Offense, Defense, Brains, and Speed, they can influence what form their partner will eventually evolve into. Those that preorder the game will get access to five special DLC Digimon, a remastered copy of the 1999 Digimon World soundtrack, and two original Vita themes, "ver. Nostalgic" and "ver. Dot." Theme ver. Dot features a montage of original Digimon LCD sprites, while theme ver. Nostalgic turns the screen into the layout of a Digital Monster virtual pet. The game will retail for 6,980 yen (7,539 JPY after tax). 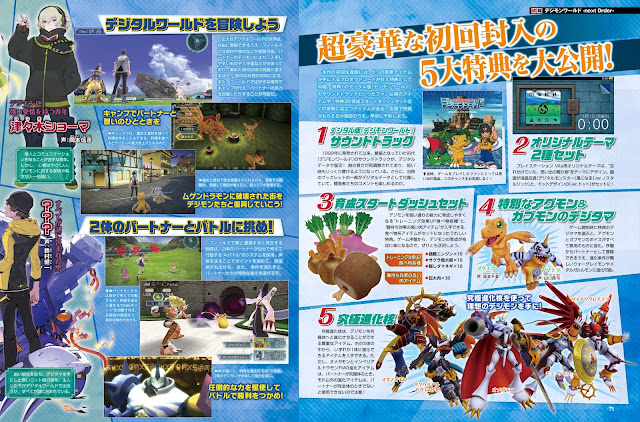 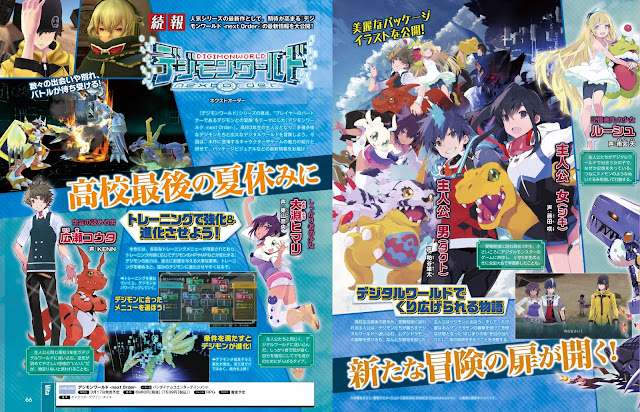