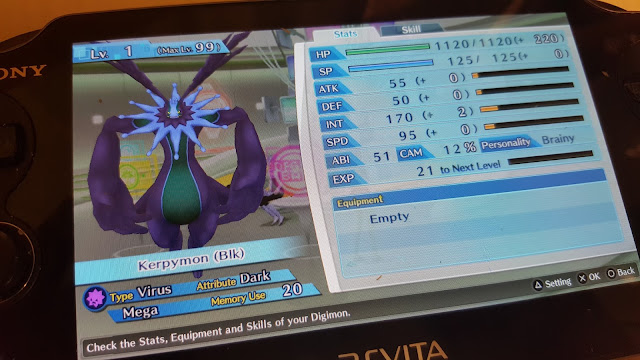 The Support Skill of the international-exclusive Cherubimon Vice is Evil Heart, which increases the amount of SP received from absorption effects by 30%. Evil Heart is a Skill essentially designed for the game's multiplayer mode, where SP restoration is rare and precious. Conventional methods are to use Lilithmon's Lust to gain back SP every time a Digimon receives a physical attack, or Marine Angemon's Ocean Love to recover 5% SP every turn. Vice instead amplifies the effects of the ever-popular Physical Drain and Spirit Drain, which restore 10% of the damage they deal as SP to the user. This causes Phys/Spirit Drain to exceed Ocean Love for Spirit efficiency, albeit with a higher memory cost attached to Vice and limited utility outside of those specific Skills.

Vice's Special Skill is Lightning Spear, which costs 40 SP, is of the Electric element, and deals piercing damage. Lightning Spear hits twice and has an increased chance to score a critical hit.

His stats are identical to those seen in Bandai's stream early last December--the discrepancy between his base stats and the in-game image above comes from a combination of farm training and his Brainy Personality, which is boosting his Intelligence in the screenshot by 5%.
Posted by Touya at 10:25 PM