February 26th, 2016. The Digimon World -next 0rder- title site updated with Titamon's character profile today, as well as four new screenshots featuring a mix of storyline and battle sequences. The screenshots show Metal Etemon and Nanomon speaking in front of a "Lemon Power Plant" (レモン発電所 Remon Hatsudensho), with Etemon seemingly bullying Nanomon for it. They also show Omega Shoutmon and Arresterdramon in gameplay, who were previously leaked in this month's issue of V Jump. Omega Shoutmon can use the Mach Jab tech, as well as the Finish move Hard Rock Damashii, while Arresterdramon has access to Buster Dive. Titamon's profile is translated below. 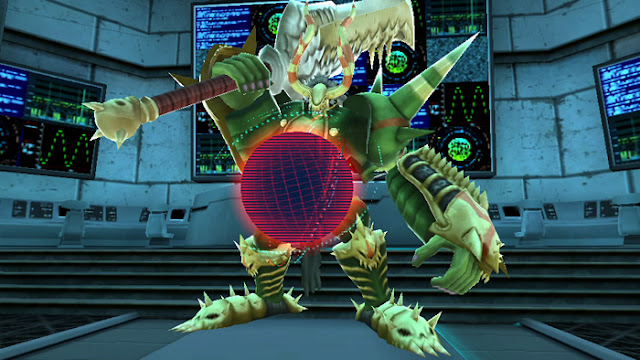 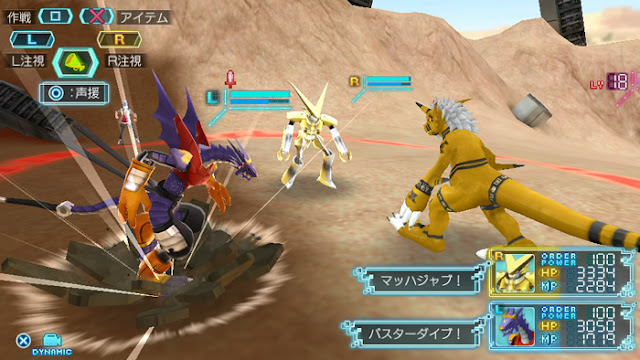 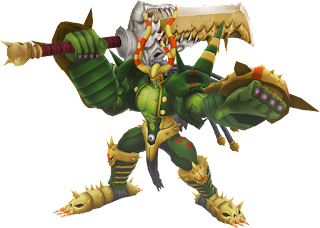 Before the protagonists stands a single formidable enemy. An avatar of destruction born from the gathered grudges of countless roaming Digimon of a particular region, his conduct itself is thoughtless destruction, acting under Shouma's direction.

The profile is a counterpart to Metal Etemon's, made public last week. Titamon was featured alongside Metal Etemon in both V Jump and in the game's Jump Festa trailer.

Bandai has maintained a constant countdown to the game's Japanese launch on Twitter this past month, uploading photos every day stating how many days remain. Digimon World -next 0rder- will launch in Japan March 17th, 2016, on the PlayStation Vita for 6,980 yen (7,539 JPY after tax). It is the latest entry in the World series, succeeding directly from Re:Digitize Decode on the 3DS, Re:Digitize on the PSP, and World on the PSX. Tying into Digimon Adventure tri., the game will feature Maicoomon as free downloadable content.

Those that preorder the game will get access to five special DLC Digimon, a remastered copy of the 1999 Digimon World soundtrack, and two original Vita themes, "ver. Nostalgic" and "ver. Dot." Theme ver. Dot features a montage of original Digimon LCD sprites, while theme ver. Nostalgic turns the screen into the layout of a Digital Monster virtual pet.
Posted by Touya at 11:52 PM