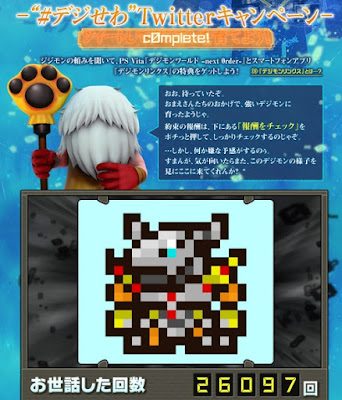 February 9th, 2016. The official Digimon World -next 0rder- title site updated with the results of the game's Twitter campaign, which now reads "c0mplete." The online virtual pet hosted on the site finally evolved to War Greymon today after more than 25,000 tweets were made by fans promoting the game, unlocking many associated rewards. In total these comprise six Chain Melons for Japanese copies of -next 0rder-, and forty Digistones for Linkz. As was promised in the preceding Metal Greymon update, fans are being rewarded with not just in-game items, but also with two smartphone wallpapers. The first wallpaper is themed after the original V Jump promotional images of the game from late July to early August, while the second wallpaper is based on the game's cover. 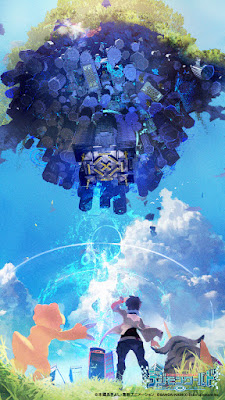 A special message from Jijimon on the homepage thanks fans for all their hard work, congratulating them on raising a strong Digimon together. Fans can download the wallpapers here.

Those that preorder the game will get access to five special DLC Digimon, a remastered copy of the 1999 Digimon World soundtrack, and two original Vita themes, "ver. Nostalgic" and "ver. Dot." Theme ver. Dot features a montage of original Digimon LCD sprites, while theme ver. Nostalgic turns the screen into the layout of a Digital Monster virtual pet.
Posted by Touya at 8:13 PM