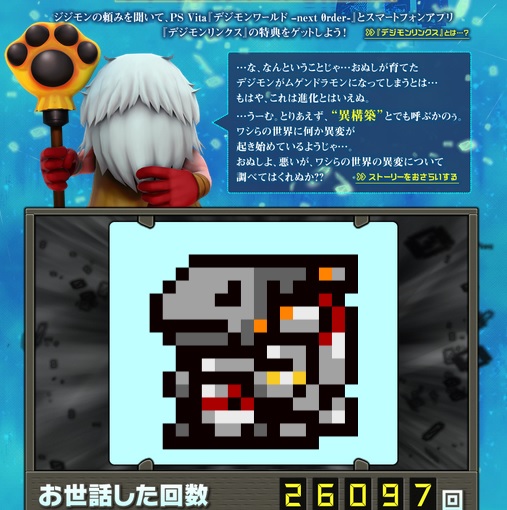 February 17th, 2016. The War Greymon that fans had so diligently raised on the Digimon World -next 0rder- title site underwent a sudden mutation, becoming a Mugendramon. Jijimon is calling this unexpected change a "different system" (異構築) rather than an "evolution," stating that it's due to some incident beginning in his world. At this time, there is nothing fans can do to revert Mugendramon to his previous stage; Jijimon simply asks them to investigate what's going on in his world.

The mutation is likely related to the mass transformation into Mugendramon previously revealed to be going on in -next 0rder-'s Digital World. The phenomenon originates from "Analogman's curse," a postgame quest from the original Digimon World in which a Digimon would turn into Mugendramon once every in-game year.

Digimon World -next 0rder- will launch in Japan March 17th, 2016, on the PlayStation Vita for 6,980 yen (7,539 JPY after tax). It is the latest entry in the World series, succeeding directly from Re:Digitize Decode on the 3DS, Re:Digitize on the PSP, and World on the PSX.
Posted by Touya at 11:21 AM