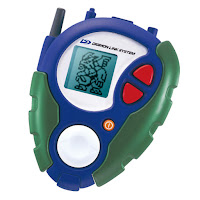 March 11th, 2016. The latest color version of the D-3 Digivice Ver. 15th became available via the Premium Bandai web shop today, in a run of just 3,000 units. Like with the black and blue Ver. 15ths before it, the Paildramon Color device is being given a limited run. Based on the color scheme of Motomiya Daisuke & Ichijouji Ken's Jogress D-3, the toy goes on sale for 9,990 yen from 11:00 PM Japanese Standard Time. The finished devices will ship in July. Those that order it will receive a Paildramon illustration sheet.

The Digivice will contain more than 150 Digimon, with more than 80 being usable by the player. There are six available partner Digimon, the selection being derived from Digimon Adventure 02; Patamon, Hawkmon, V-mon, Wormmon, Armadimon, and Tailmon. Aside from the color the device appears to be identical to its predecessors, with the structure of the Paildramon Color's gameplay following the same route as the original Ver. 15th D-3. The LCD toy tours players through the world of the anime series, culminating in a final battle with Armagemon. Imperialdramon Paladin Mode will be available on this Digivice just as he will be in the preceding D-3 Ver. 15th, and by connecting it to a first generation Ver. 15th, tamers can unlock a special message.