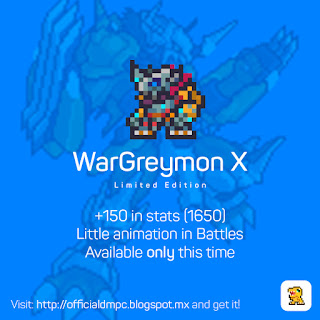 On March 1st, 2016, D-Pet developer Jorge "JoMdz" Mendez made his first announcement on the development of the project after a long hiatus. In order to fund the completion of D-Pet's iOS and Android versions, JoMdz opened up crowdfunding for the game in order to purchase the developers' licenses required to create the official .ipa and .apk files. Users were incentivized to donate by being given rewards in-app for providing their financial support.

As of March 7th, the project is believed to have met its funding goal, with JoMdz having begun development of the mobile version. Those that donated $1 were promised credit in the final app, and a spot as beta testers for future versions. Those that donated $5 or more will receive the final version a week ahead of the general public, and those that gave $10 or more will get a limited edition character. For donors that gave $20, a limited edition War Greymon X with inflated stats and battle animations is being provided on top of all previous rewards.

On March 9th, JoMdz uploaded a photo of an Android test for the app, and on the 14th began publishing an up-to-date list of donors. This was accompanied by a report on the first build of the mobile game. On the 17th JoMdz clarified that he was continuing to work on redesigning several of the game's objects and developing its networking system. On the 22nd, he announced that the game would have a Pendulum feature, increasing the Digimon's power by shaking the smartphone.

D-Pet, formerly known as Digimon Ver. PC, was originally developed by Malaysian programmer Hong Ming (alias "nrg890110" or "hosc") during Digimon's dark age in mid 2009. In part due to Digimon's long official hiatus--Savers had ended two years prior and Xros Wars did not air until a year after DMPC came out--the game experienced a brief surge in popularity when it first launched. After hosc disappeared in 2010, DMPC was revised by JoMdz into 2.0, working with a small team of designers and individuals that acted as public relations contacts, managing its various communities. DMPC 2.0 introduced color graphics, additional evolutionary levels, and new Digimon. The game had been especially notable throughout 2009 and 2010 for having online battles through Hamachi, and an ever-growing count of available Digimon.

Eventually, the difficulty of managing community fanpages for the game, design conflicts over the direction of Ver. PC, and a lack of enthusiasm on the part of fans lead to a slowdown in development and its user base shrinking considerably. In 2013, JoMdz resumed work on Ver. PC, and began developing D-Pet in 2014 as a continuation of the program. The rechristening to D-Pet was chosen in order to reflect the fact that the new program will be playable not just on PCs, but also on Apple computers, iOS, and Android devices. D-Pet is planned to eventually have Facebook connectivity in order to make finding a battle easier once the online functions are completed.
Posted by Touya at 1:03 AM