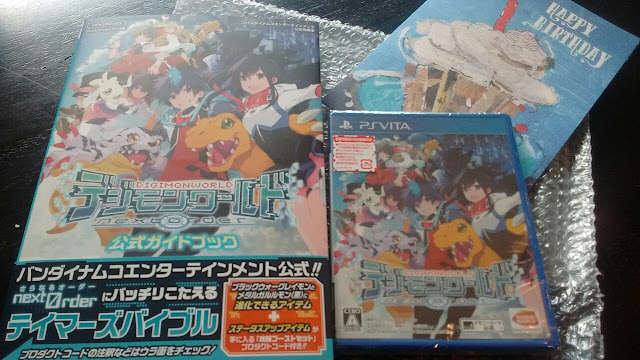 March 17th, 2016. Today, Digimon World -next 0rder- launched in Japan exclusively on the PlayStation Vita. The game features the traditional open world-virtual pet gameplay that popularized the original Digimon World, and features the protagonist of the first game in a prominent supporting role.

Singer Aoi Eir tweeted about the launch, asking fans to look forward to playing the game and stating that she herself will be playing. Former Digimon Adventure director Kakudou Hiroyuki also tweeted about the launch, explaining that he assisted in directing the voice recording process for the game. They were joined by Han Megumi, voice of Shiramine Nokia in Cyber Sleuth and Kuzuhamon in -next 0rder-. Han showed off her own copy with exclusive Jump Festa stickers. The official Digimon games Twitter celebrated the launch with its costumed mascots Agumon & Gabumon, and character designer Taiki also acknowledged the launch.

This is the first Digimon World game in three years, following up from Re:Digitize Decode on the 3DS. It's also a highly experimental title, introducing a second partner Digimon for tamers to raise simultaneous to their first, a combination evolution system that allows for temporary mid-battle fusions, and a radical new "0rder System" that allows tamers to issue direct commands to their Digimon by spending points that they build up by cheering on their team.
Posted by Touya at 1:36 AM