March 11th, 2016. The official Digimon World -next 0rder- title site updated with the game's final batch of screenshots prior to launch. This batch shows the Demon Lords Lilithmon and Belphemon Sleep Mode as available Digimon in the game, as well as Banchou Leomon and the DLC Digimon, Maicoomon. An additional screen provides a view of an expanded Meat Farm in the developed version of Floatier. The expanded farm features fruit and vegetable trees on top of its standard fare. 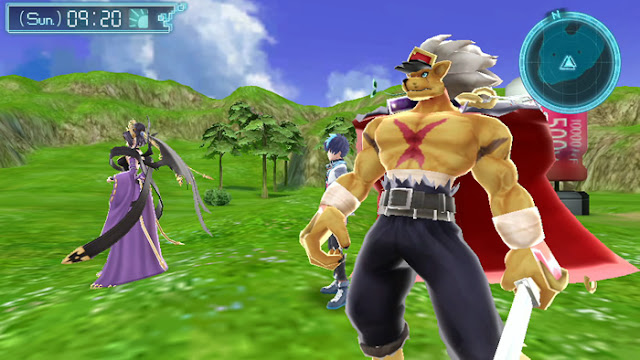 The website also added a new video to promote the game, which video advertises the voiced Agumon and Gabumon DLC. These special Digimon are not voiced by standard Digimon World sound effects, but instead retain their original seiyuu from 1999, Chika Sakamoto and Yamaguchi Mayumi.

Those that preorder the game will get access to five special DLC Digimon, a remastered copy of the 1999 Digimon World soundtrack, and two original Vita themes, "ver. Nostalgic" and "ver. Dot." Theme ver. Dot features a montage of original Digimon LCD sprites, while theme ver. Nostalgic turns the screen into the layout of a Digital Monster virtual pet.
Posted by Touya at 11:35 PM