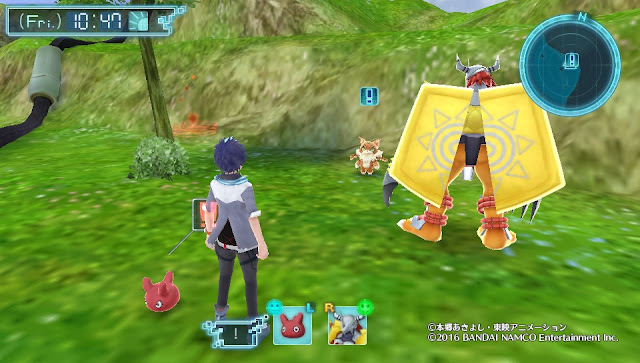 March 31st, 2016. The Digimon Adventure tri. crossover DLC for Digimon World -next 0rder- went live today, allowing tamers to download the additional scenario "Maicoomon's Mystery" to their games, and unlock the Maine Coon Digimon's special evolution item. After downloading and installing the update, tamers can fight Maicoomon at the Used Cable Route in the Nearby Grasslands area. The update is accessed via the "additional contents" subsection to the right of the game in the Vita menu, the same menu through which the Twitter Campaign DLC items were made available.

The DLC will be followed by an update in early April that will patch the game to ver.1.02, which will introduce bug fixes, adjust game balance, and add an additional postgame quest involving a crisis of the Digital World.
Posted by Touya at 2:07 AM