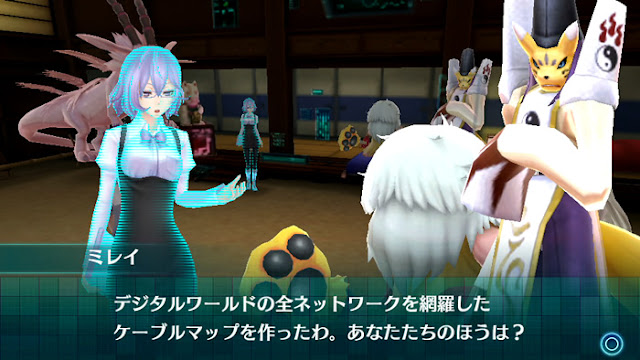 March 4th, 2016. The official Digimon World -next 0rder- title site updated with four new screenshots, showing crossover character Mikagura Mirei speaking with Jijimon and Taomon about creating a "cable map" comprising all of the Digital World's networks. Other shots of the town of Floatier show the possibility of a fishing hole in the expanded city, in addition to the regular fishing spots tamers can find throughout the Digital World.

(Gomamon uses the word 爆釣 bakuchou here, literally "explosive fishing." It's not recognized by any dictionaries, but this fishing fansite defines it as "catching a lot.")

Those that preorder the game will get access to five special DLC Digimon, a remastered copy of the 1999 Digimon World soundtrack, and two original Vita themes, "ver. Nostalgic" and "ver. Dot." Theme ver. Dot features a montage of original Digimon LCD sprites, while theme ver. Nostalgic turns the screen into the layout of a Digital Monster virtual pet.
Posted by Touya at 11:23 PM