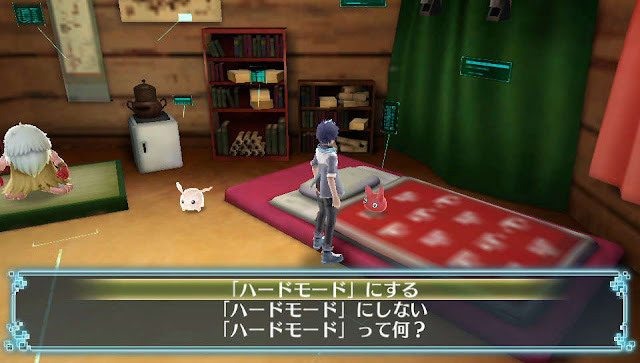 March 16th, 2016. The official Digimon World -next 0rder- Twitter account revealed the details on a day one Hard Mode addition to Digimon World -next 0rder-, which adjusts the game balance by modifying the stats of enemy Digimon. Tamers can switch Hard Mode on and off by speaking to Punimon within Jijimon's house, or get more information about the mode by asking the Digimon.

Those that preorder the game will get access to five special DLC Digimon, a remastered copy of the 1999 Digimon World soundtrack, and two original Vita themes, "ver. Nostalgic" and "ver. Dot." Theme ver. Dot features a montage of original Digimon LCD sprites, while theme ver. Nostalgic turns the screen into the layout of a Digital Monster virtual pet.
Posted by Touya at 1:12 AM