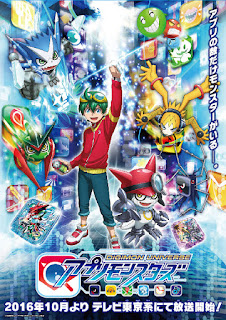 The official Appli Monsters portal site currently hosts a small collection of Japanese-language commentary from those working on the TV anime. Featuring remarks by the director, series composer, character designer and producer, these comments drop several hints as to the themes and key idea of Appmon. Their statements are translated below.

Series Director, Koga Gou:
"It's been 17 years since Digimon Adventure! Right now digital technology is indispensable to our daily lives, and perhaps artificial intelligence will exceed humanity's abilities. Is that a good thing? A scary thing?

To the children living in the "now," I want to convey an exciting adventure story of a new "current" Digimon = Appmon. Please look forward to it!"

Series Composer, Katou Yoichi:
"Artifical Intelligence is a key point to this work, it's a very hot subject that's jumping into the news every day. I want to look at it freely, laugh, and while a hot story's there, give meaning to this current era, to see the meaning there. The protagonist Haru and his friends obtain Appli Drives and meet Appmon, and in each of their lives take important steps forward. Kindness is the key to everything. We gathered the perfect staff for this work beginning with supervisor Koga and producer Nagatomi, and the screenplay team. I'm very much looking forward to it!"

Character Designer, Onuki Kenichi:
"When I first saw Haru's rough draft, I said "It's good!" and felt relieved right away.

This is my first time working for Toei, but it's not just the scenery, it's the various duties and discussions that make me look forward to working on this. There's still a little time until the broadcast, so I'm going to do my best."

Producer, Nagatomi Daichi:
"'A story that's Digimon, yet not Digimon.'

That's Appli Monsters. I want both people that already love Digimon, and those that are seeing it for the first time, to please get swallowed up in Haru and Gatchmon's story. (Laughs) 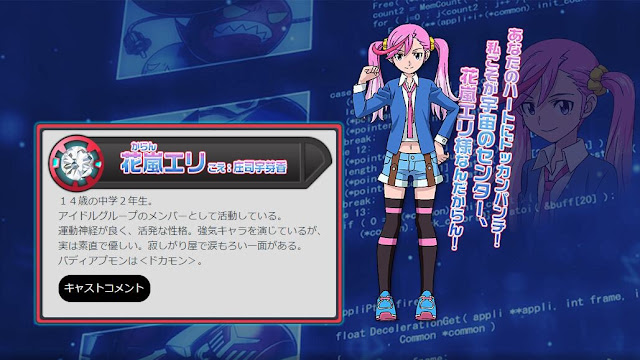 June 29th, 2016. The Digimon Universe portal site updated today with two new character profiles, featuring the series' first female character Karan Eri and her Appmon partner, Dokamon. Like the previous trio of profiles, these contain commentary by the voice cast, which is translated below. A recurring theme among the cast members thus far is a sense of unreality--most of them have doubted that they've been cast in the long-running Digimon series, expressing both excitement and anxiety at the roles. 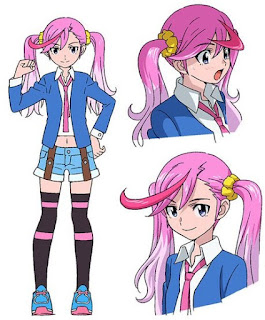 Karan Eri
Voice: Shouji Umeka
"Dokkan Punch to your HEART! I am the center of space, the supreme Karan Eri!"
A fourteen-year-old second-year middle school student, she's an active member of an idol group with great reflexes and a lively personality. She plays a strong character, but in reality is docile and kind. She also has a side to her that easily succumbs to loneliness. Her Buddy Appmon is Dokamon.

Cast comments
Karan Eri's voice, Shouji Umeka:
"Writing commentary like this right now, it doesn't feel real, it still feels like a dream. The Digimon series beloved by so many people. I'm really happy to take this chance. Ever since I was a kid I got this feeling of excitement, and a "dream" from animation. I want to do my best along with Eri-chan to impart that "dream" packed full of heart-pounding excitement to the kids of today." 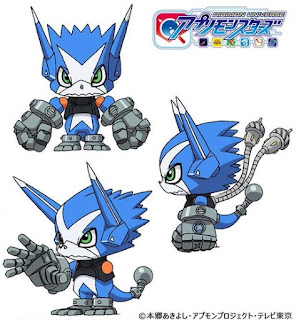 Dokamon
Voice: Kumai Motoko
"Dokkan Punch to your BODY!"
Eri's Buddy Appmon. A powerful person with a kind personality, they're an action game application Appmon. Loves everything about Eri, and respects Gatchmon as his aniki. (A kind of big-brother figure found in yakuza gang culture. The Agumon of Digimon Savers also referred to protagonist Daimon Masaru as his aniki.)

Cast comments
Dokamon's voice, Kumai Motoko:
"It's a great honor to be part of the latest work in the long-loved Digimon series! I'm looking forward to recording. Taking this opportunity, I'll do my best to digitally evolve my analog self. (Laughs) I want to perform with all my soul, so please cheer for me!"

06/29/16 Update: We now have the profiles for Karan Emi and Dokamon with additional cast commentary, as well as staff commentary on Appmon as a whole. 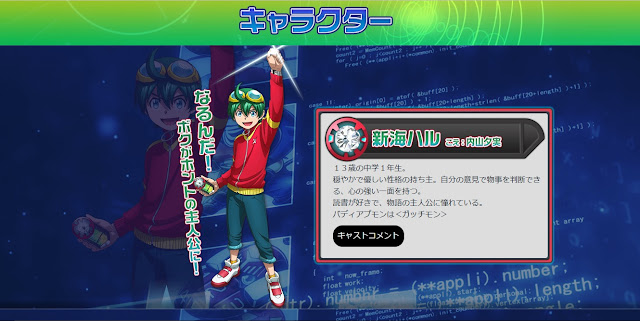 The character profiles and cast commentary are translated below. 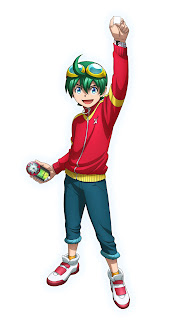 Shinkai Haru
Voice: Uchiyama Yumi
"I'll do it! I'll become a true hero!"
The protagonist, a 13-year-old first-year middle school student with a kind and gentle personality. He has a strong-hearted side to him, deciding things based on his own opinions. Loves to read, and longs to be the hero of his own story. His Buddy Appmon is Gatchmon.

Cast comments
Shinkai Haru's Voice, Uchiyama Yumi:
"When I was told I would be playing Haru, I had a feeling like finally being able to see a long-held dream. I was in a daze the day I found out, but during the PV recording this feeling of "This isn't a dream!!" happily welled up. During the audition I was impressed by the staff's passion for this work, so I'm truly happy to also help out!!

To play the protagonist of the series I've loved to watch ever since I was a student, my heart is beating so fast and loudly with all its might, but I'll use all my power to play Haru, so everyone please look forward to it!!" 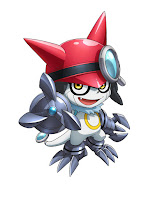 Gatchmon
Voice: Kikuchi Kokoro
"I'll look up your future!"
Haru's Buddy Appmon. Has the power of a search application. He's a bit of a showoff, but with his search ability he can uncover various information. His favorite food is 'Gatch Monaka'. (Monaka is a type of Japanese dessert made from bean jam and mochi wafers.)


Cast comments
Gatchmon's Voice, Kikuchi Kokoro:
"When I received the news about the Gatchmon decision, on the other side of the phone my manager was panicking "They don't even know your name and age!!"  Listening to the decision, I also no longer knew my own name and age...I was dumbfounded...I was nervous, but from then on overwhelmed with happy feelings. A little while after the broadcast began, I was happy imagining kids playing make-believe Appmon...Now my heart pounds waiting for the day we do postrecording!" 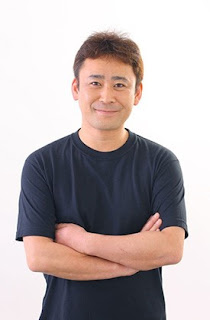 Cast comments
Appli Drive's Voice, Takagi Wataru:
"I'm very honored to be part of the latest work in the historic Digimon series, Appli Monsters! We're creating toys that can be enjoyed by children and adults alike, developed alongside the airing anime. I put in a voice to convey a feeling of maximum tension in every monster! Please enjoy it with me, everyone! I'm also looking forward to the broadcast from here!!"