Actor of the "Digimon Generation" Voices Asuka Torajirou in Appmon 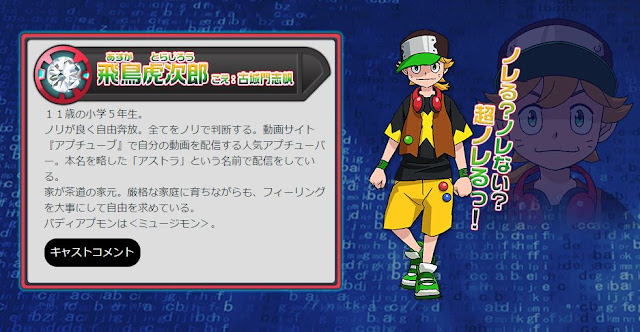 July 6th, 2016. The official Appmon portal site updated with two new character profiles, Asuka Torajirou and his Buddy Appmon, Musimon. Like the previous character profiles, these include bits of commentary by the voice cast about the casting decisions surrounding the characters. Torajirou's actor, Kokido Shiho, explained that she was excited to be working in a series that she watched as a child. No doubt this makes her kindred spirits with Uchiyama Yumi, who voices Appmon's protagonist and is likewise a longtime fan of the series. The character profiles and cast commentary are translated below. 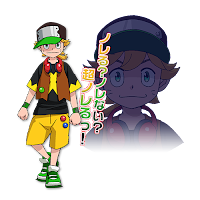 Asuka Torajirou
Voice: Kokido Shiho
"You follow? You don't follow? Super-follow!"
An 11-year-old fifth-grade elementary student. Has an infectious Bohemian attitude, and judges everything based on that mood. On the video site "AppTube," his self-published videos make him a pretty popular Apptuber. He publishes under the name "Astra" shortened from his real name. Part of an iemoto family dealing in tea ceremonies, he grew up in a strict home, and so has a feeling of longing for great freedom. His Buddy Appmon is Musimon.

(Iemoto is a traditional hereditary Japanese system of training in the classical arts. In Digimon Adventure, Sora's mother was also an iemoto, but in flower arrangement rather than tea ceremony. "Astra" comes from Asuka Torajirou to create Asutora.)

Cast comments
Asuka Torajirou's voice, Kokido Shiho: "When the casting was decided for Torajirou, I was so happy I got goosebumps. Since I grew up as part of the Digimon generation, performing in a series I watched as a child is like a dream. I think there are many like me, who were looking forward to a new Digimon series. This is a work which a wide variety of generations will watch, and with the power of my partner Musimon I want to go go forward at full strength, so please look forward to it!" 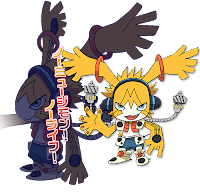 Musimon
Voice: Tamura Nao
"No Musimon No Life!"
Torajirou's Buddy Appmon, with the power of a music app. Like Torajirou, he has a high-spirited personality.

(Musimon's quote is based on Tower Records' catchphrase, "No Music, No Life." Similar allusions were made in Cyber Sleuth and in -next 0rder-.)

Cast Comments
Musimon's voice, Tamura Nao: "Participating in the world of Appli Monsters as Musimon, I'm full of incredibly happy feelings! I got goosebumps when I saw the movie, and it was moving seeing the staff's passion for this work. So that this series becomes beloved by many, I'll do my best as an Appmon Member!"