Appmon Episode 2 Review: "The Mysterious Road Guide! I Am Navimon-Degozaru!" 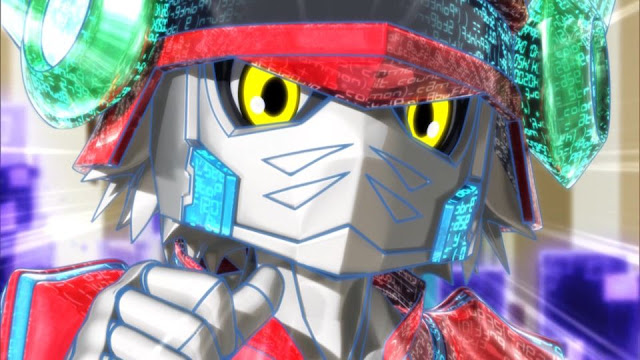 I Am Navimon-Degozaru! starts with several threads. The introduction of Wato "Watson" Takeru, the involvement of Gatchmon in Haru's daily life, and most interestingly a further look into Appmon's world. The anime takes pains to portray this world as our world, setting it on October 7~8th, 2016, and using multiple real-world technologies as reference points for it. But what starts out as a fairly tame episodic plot suddenly shift in scale as Haru and Gatchmon are confronted by an obstacle far outside their initial scope. 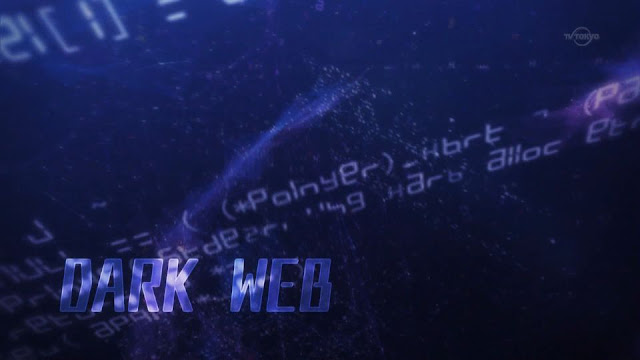 To start us off, Haru walks the viewer through the structure of the Net Ocean. Comprised of the Surface Web at its uppermost layer, then the Deep Web below, and finally the Dark Web underneath. These are real descriptors for spaces of the internet, with the Deep Web being made up of a huge swathe of underground information not regularly indexed by search engines. In the real world, the Dark Web is likewise another step removed as a form of information deliberately concealed from normal browsers.

Appmon, which has already drawn favorable comparison with Rockman EXE/Mega Man Battle Network, invokes the Dark Web as a major setpiece. While EXE predicted the existence of the Dark Web three years early via its own Undernet, Appmon is working with a location that's already been implanted in the public imagination. The choice to house its overarching antagonist within the Dark Web is intriguing, as being the abyssal plane of the internet, it follows that the web's own "leviathan" would lurk there. 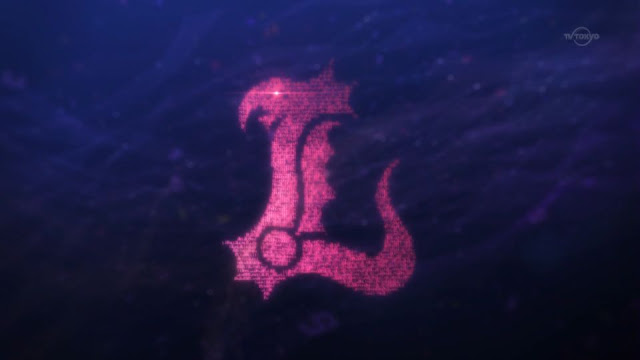 Gatchmon later explains that the "final boss AI" Leviathan is the source of the berserk Appmon. By propagating its L-Virus, Leviathan causes normally-benign Appmon to go berserk, helping it seed chaos throughout the human world. Prior to meeting Haru, Gatchmon had been evading that same AI, intending to thwart its plans.

This exposition is coupled to other developments. Navigation apps have been going haywire throughout the town, creating a citywide panic, and Haru's classmate Ai is one such victim. After learning that she went missing while out shopping, Haru immediately volunteers to go search for her--a dramatic shift from his behavior in the first episode, and one that doesn't go unnoticed by Yuujin.

This episode takes full advantage of its premise, parodying human dependence on navigation apps. While even Obama gets mislead by Navimon in a montage of lost persons, today's most humorous moment is when Navimon leads a poor girl to walk around in circles. How often have we seen something similar with Google Maps, unable to pinpoint our direction or even where north is? 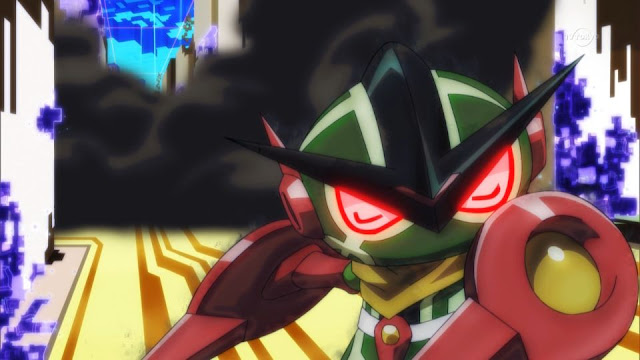 Navimon himself has an archaic speech pattern and styles all of his misdirection as jutsu, poking fun at the popular image of the ninja. Where Messemon attacked with text messages transformed into projectiles, Navimon sticks his enemies with a Crash Bomb-like pin that turns all of his other shots into homing attacks.

Like in the previous episode, Haru and Gatchmon overcome the monster of the week using Gatchmon's Deep Search function to pinpoint its weakness. (Not unlike the gamers at home googling Appmon weaknesses in Cyber Arena.) However, this episode established the fears that each episode would only boil down to Deep Search were unfounded. Haru accomplishes his strategy of the week--"Rotate"--by using the much-teased Applink ability, linking Gatchmon and last week's Messemon. One background point to this was that the final combination was shown to literally be more than the sum of its parts, with Gatchmon's base 1000 power and Messemon's base 500 coming out to 2000 as "Gatchmon Plus Messemon." 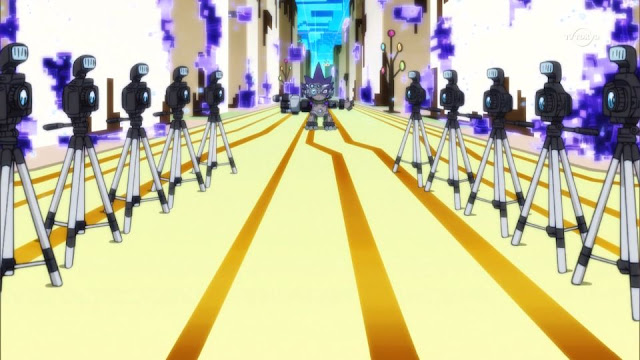 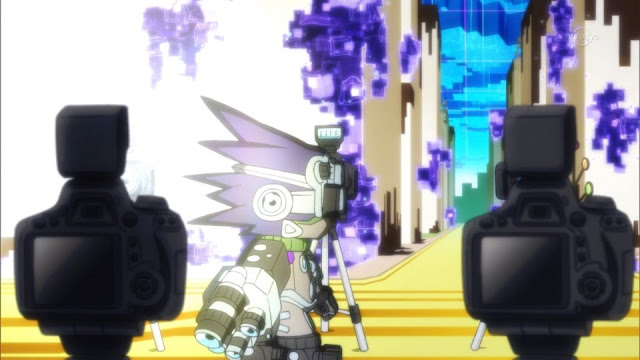 The monster-of-the-week formula that the previous episode left us to anticipate is subverted by the sudden appearance of Cameramon. Once Haru captures Navimon, Cameramon stepps in to nip Leviathan's opposition in the bud. The narcissistic Cameramon leaves a strong opening impression, literally conjuring a double line of cameras to walk through as he fights, giving him countless photographs of himself to look back on. 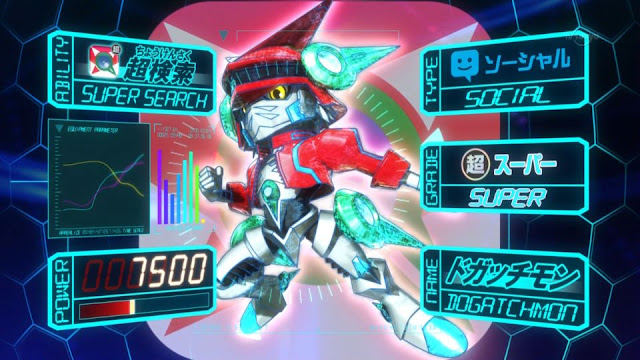 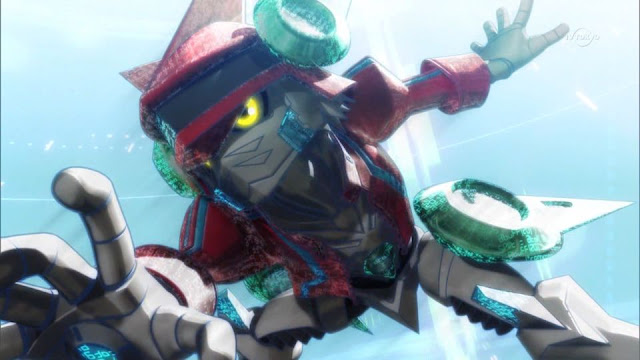 Haru picks up the slack when Gatchmon seems incapacitated, thinking on his feet and figuring out that he can Applink Navimon just like he did Messemon. In the process he inadvertently App Fuses Gatchmon and Navimon into his first Super-grade Appmon, DoGatchmon, with an exponentially higher base power of 7500. 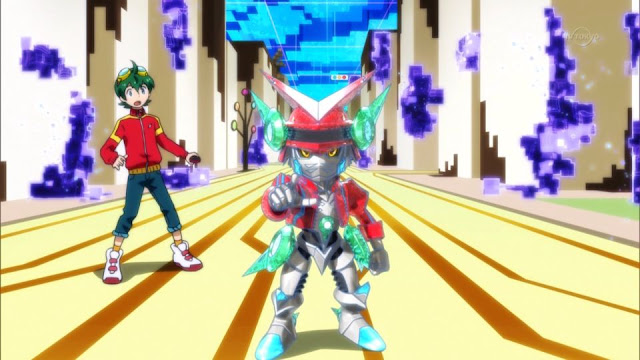 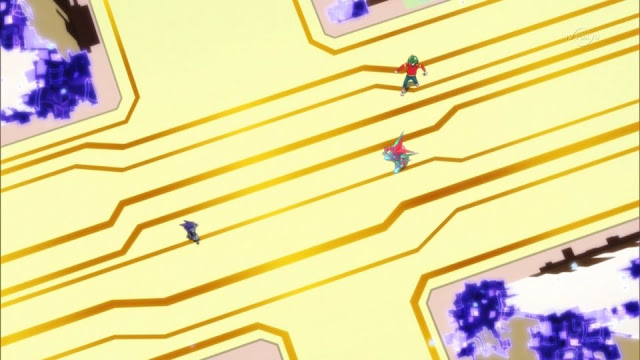 I Am Navimon-Degozaru! ends on a cliffhanger, with DoGatchmon and Cameramon about to face off. It seems that Appmon is featuring its Super-grade monsters as 3D CGI characters rather than going for hand-drawn. This has been a somewhat popular trend in kids' anime of late--see Future Card Buddyfight--and while I have a personal appreciation for good hand-drawn animation, I've also witnessed the terribly off-model and/or cardboard cutout monsters churned out by the likes of Cardfight!! Vanguard, Yu-Gi-Oh!, and our very own Digimon. Using CGI for the more complex designs makes sense for keeping the animation consistent and on-model, while also giving higher-grade Appmon a certain prestige. We certainly don't want DoGatchmon turning out like this; 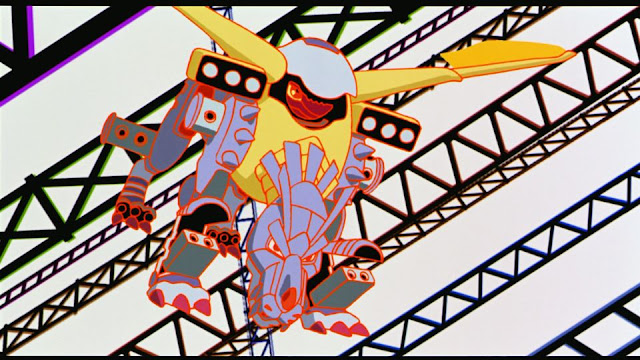 Overall Appmon's initial episodes have taken on a tone similar to Digimon Adventure V-Tamer 01, introducing and demonstrating the abilities of a monster-of-the-week, then coming up with a creative way to defeat it. Haru's initial solutions are certainly about as simple as Taichi's first strategies ("Let the enemy attack first!" "Wait for it to slow down!") but the series is taking pains to escalate its greater-scope conflicts faster than past seasons.

The power level pacing thus far matches the tempo of other Digimon series, giving our first Adult/Armor/Super in episode 2, but the pacing of story beats is entirely different. By introducing a direct subordinate of Leviathan and involving him in a battle with the protagonist so quickly, Appmon's functionally jumped ahead to episode 8 (Adventure) 14 (Tamers) 6 (Frontier) or 12. (Savers) This is a shift I'm critically receptive to--it's trimming the fat, which is what makes it so difficult to introduce Digimon to mainstream audiences in the first place.

One thing that struck me regarding this episode was the way Yuujin seemed to get subtly pushed into an antagonistic role again, in a subtler way than at the end of episode 1. Ai vanishes and becomes a motivator for Haru to track down Navimon, but then she turns up safe and sound with Yuujin later. It seems as though the series is pushing for Yuujin to be in cahoots with Cameramon, knowingly or unknowingly. 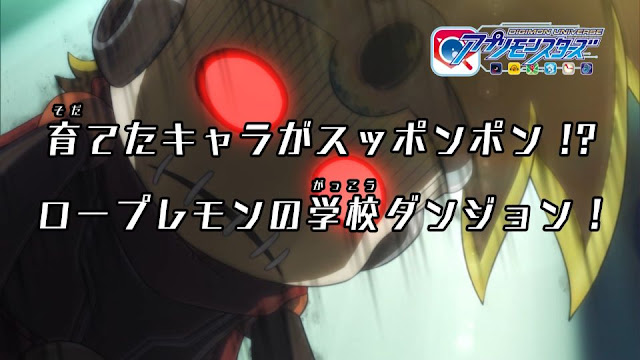 Next week's episode is "The Character I Raised is Stark Naked!? Roleplaymon's School Dungeon!"
Posted by Touya at 11:50 PM