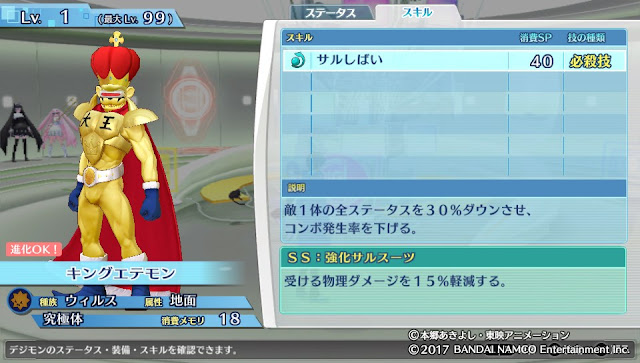 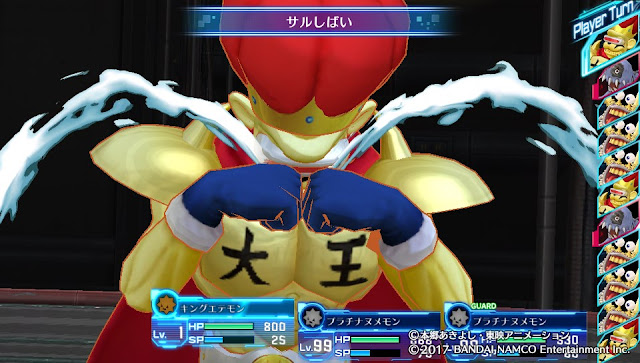 Notes on Monkey Business
When the Skill says "all," it's referring to Attack, Defense, Intelligence, and Speed. Agility, Accuracy, and Critical are unaffected by the Skill.

Sarushibai (さるしばい or 猿芝居) is a Japanese idiom referring to over-acting in the theater, or otherwise clumsy attempts at deception. (Compare the English term "ham" when referring to an actor.) "Monkey Business" is an American-English idiom referring to shenanigans or some foolish activity. In this case, the two terms intersect nicely as the most important part is the "monkey" portion.

Comparison with Metal Etemon
Both King Etemon and Metal Etemon possess the Reinforced Monkey Suit Support. The damage dealt by attacks after using Monkey Business will exceed the damage dealt by a single Banana Slip, and unlike the Stun status inflicted by Slip, the stat decrease from Monkey Business cannot be blocked by accessories or Supports. At level 50 Metal Etemon will have 340 more HP, 14 more SP, 30 more Attack, 25 more Defense, 42 less Intelligence, and 1 less Speed. (This is a difference of an entire Speed tier; Metal Etemon is tied with Craniummon, Hi Andromon, Pinocchimon, Herakle Kabuterimon, Mugendramon, Magnamon, and Rapidmon Armor. Being at 125 instead of 124 puts King Etemon above all of these but below Panjyamon.)

As a solo Digimon Metal Etemon is generally superior, but King Etemon is a better team player capable of turning two-hit knockouts into single-hits. Monkey Business is both an offensive and defensive Skill, since the 30% Attack and Intelligence reduction will also reduce the damage your team takes. (Even from Piercing Skills that draw on a Digimon's AT/IT for damage.) 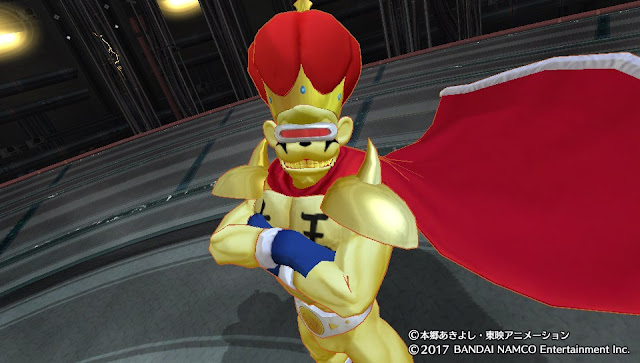