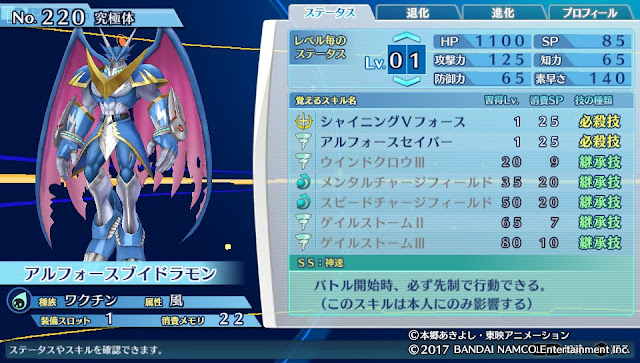 Digimon Story Cyber Sleuth: Hacker's Memory launched in Japan December 14th, and a look at its updated Field Guide confirms the longstanding bane of Cyber Sleuth's ranked multiplayer has taken a devastating blow. Ulforce and Aero V-dramon have been staples of the competitive scene since its most formative days, as well as keystones in gamebreaking strategies that once robbed even the final boss of the chance to attack.

Their shared Support Skill, known as Godspeed (神速 Shinsoku) in Japanese and Swiftness in English, originally caused the user's party to always move first in battle by inserting an extra turn into the timeline for each party member--even when they would have already moved first to begin with. This Support Skill was also stackable, so that a party of three Ulforce or Aero V-dramons would get 9 consecutive turns at the start of battle, and those turns were transferable to any Digimon switched in. 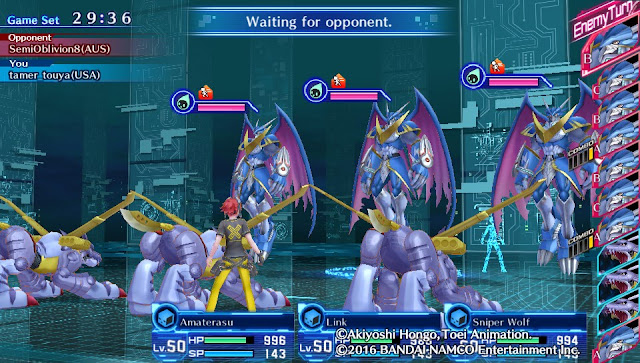 Hacker's Memory adds a single clause to Swiftness; "(This skill only affects the user.)"

Although it can still be stacked by running multiple V-dramons, this one line of text reduces Swiftness to a parlor trick. Even if the turns were still transferable, after using up one turn to switch in a tamer's actual battle party they would only have 2 extra turns before normal speed rules begin to apply to the timeline--making it no longer worth investing in the 60~66 Memory to open with a lineup of three Swiftness Digimon. There isn't much Ulforce can do on his own with just one extra turn. Tamers can still get in a quick Safety Guard, Status Barrier, or Chain Max, but battles are no longer going to be decided by which side wins the coin flip to have their Swiftness proc first.

This change affects both Ulforce and Aero V-dramon, and what place they will have in the new metagame is uncertain. Many tamers still have yet to finish the game's main scenario, and much of the roster remains untested. Other changes to the game's abilities are still being compiled, but include modifications to the base accuracy and power of many inheritable Skills, additional item slots on certain Digimon, and the replacement of some Special Skills. For example, Monzaemon's Lovely Attack retains its animation and original name but has been changed from a Neutral-attribute Piercing attack to a unique healing move with secondary buff effects.

Digimon Story Cyber Sleuth: Hacker's Memory will launch worldwide for PlayStation Vita (digital) and PlayStation 4 (physical and digital) on January 19, 2018. The game is a sequel to the 2015 Cyber Sleuth, taking place "beneath" the events of the original game. The player visits areas of the EDEN virtual network not explored in the original title, trying to clear themselves of wrongdoing after being framed by hackers for a crime they didn't commit. Players can convert their save data from Cyber Sleuth to Hacker's Memory to preserve their Field Guide and Digimedal collection progress.

The Japanese version of the game includes Cyber Sleuth built into Hacker's Memory as one half of the full game, and players can resume their progress from their imported save using the new game mechanics and Digimon. Moreover, finishing either game or having a finished file grants the player several consumable items, equipment, and accessories, and by clearing both main scenarios the player can transfer the Digimon they've raised between their respective Digibanks.

How many of these features will be implemented in international editions--if any--remains unknown. While the Japanese edition contains Cyber Sleuth on-disc as an essential part of its save structure, Bandai Namco EU has stated that Cyber Sleuth is not included in the European release of Hacker's Memory, suggesting that the international editions will lack these features. Some have suggested that the original game could be updated through DLC to receive the new Digimon and battle mechanic changes introduced in Hacker's Memory, but this would eliminate much of the incentive to buy the sequel at all.
Posted by Touya at 4:10 AM